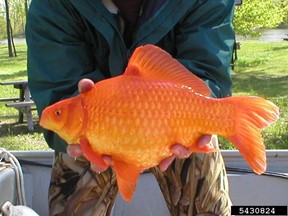 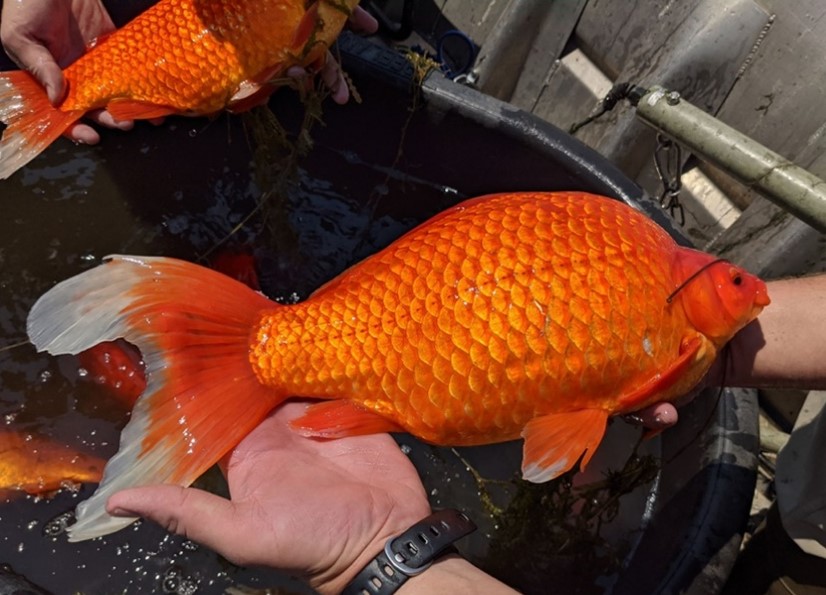 Did you know? As the first foreign fish species thought to be introduced to North America, goldfish can grow to be about the size of a football if released into the wild. They may even live up to 30-40 years old in the proper conditions.

Goldfish, when released into the wild, are an invasive species in North America. Native to eastern Asia including China, Hong Kong, Japan and the Republic of Korea, goldfish threaten Canadian waterways by preying on native species and outcompeting with them for food.

Their feeding preferences consist of fish eggs, fish larvae, and aquatic plants, and this wide array of subsistence magnifies their impact on ecosystem health and biodiversity.

Goldfish belong to the carp and minnow family and, like their counterparts, can increase the turbidity (lower the clarity) of water through their feeding activity. This reduces the amount of sunlight reaching underwater plants which subsequently leads to habitat loss for native species. These attributes, together with their high reproductive rate, make goldfish a threat to Canadian waters.

Goldfish have been kept as pets for centuries and are released when they become unwanted. In fact, sources referred to by the United States Geological Survey suggest that intentional goldfish releases were reported as early as the 1600s in North America.

Since then, goldfish have become one of the most widely distributed foreign fishes on the continent, stemming from their recognition as an ornamental species and companion. Their present establishment in the wild can be attributed to their widespread availability in aquaculture.

In Canada, goldfish live in the homes of many families, but it’s important that they remain as pets, and not be released into the wild.

It is essential to not release your pet goldfish into the wild to protect the integrity of natural ecosystems in Canada. Educating yourself on the care of a goldfish, including its life expectancy, is critical for becoming a responsible pet owner.

If you decide you no longer want to own your goldfish, consider alternatives to release, such as rehoming your fish, returning it to the store, or giving it to a local school.

There are estimated to be over 100 different varieties of goldfish, all with unique colour patterns and physical characteristics.

Adult goldfish are generally known for their bright orange colour, but they actually used to appear mainly as greyish-silver or olive-green fish. Carp that had yellow or orange coloured mutations were prized as ornamental fish and were selectively bred for thousands of years, resulting in the goldfish seen today. Other common adult colours include red, white, and black, with many individuals displaying mixed colouration.

Young goldfish are much darker than the adults, appearing olive-green or brown in colour. They lighten over time and start turning orange as they mature. Subsequent generations of adult goldfish can also revert to this wild colour after several rounds of breeding in wild environments.

Goldfish can vary in size depending on their habitat. Goldfish kept in smaller indoor aquariums only tend to grow about 2.5-5 cm (1-2 in) long but can grow up to 15 cm (6 in) when reared in larger aquariums.

Invasive goldfish released into wild ecosystems can grow much larger than in captivity. These goldfish typically range from 13-25.5 cm (5-10 in) but have been known to reach up to 38 cm (15 in) in length. Female goldfish also tend to have wider, more plump bodies that sometimes make them appear slightly bigger than males.

Reproductive females carry their eggs in their abdomen before spawning, giving them an even wider, plumper appearance than normal.

Males develop spawning tubercles during the breeding season, which appear as tiny white dots or skin nodules on their operculum (gill coverings) and pectoral (side) fins. These males will chase the females around in the water to release her eggs, often bumping and nudging into her to help speed the process.

Once released, the sticky eggs adhere to the bottom of the tank or to nearby plants and rocks to be fertilized by a male. This adhesive property becomes particularly advantageous for goldfish that have been released into the wild, since it prevents water currents from carrying the eggs away before a male can release milt for fertilization.

Goldfish can lay a few hundred to a few thousand eggs at once, but most will not hatch or will die before adulthood – for example, many eggs are eaten or left unfertilized.

Eggs hatch relatively soon after spawning. Hatching can occur as early as 48 hours later in warmer waters, though it sometimes takes between 2 and 7 days. Newly hatched fry grow quickly and are on their own to find food like algae and avoid predation (often from their own parents).

Goldfish are the longest-lived freshwater aquarium fish. With proper care, goldfish can survive 30-40 years, though an average lifespan is usually 5-15 years. Goldfish can die very quickly (within a few weeks) in poor aquarium conditions, which is why they are perceived to have a short life expectancy.

Invasive goldfish that are found outside of aquarium settings are very adaptable and able to live in a variety of environmental conditions. However, they typically prefer streams, ditches, ponds, and lakes with ample aquatic vegetation. They are often found in quiet, populated urban or suburban waters near where they may have been released by their former owners.

Goldfish are tolerant to low oxygen conditions and can survive water temperatures between 0-41°C. Overall, this enables them to have a vast range and their resilience to a variety of conditions proliferates their spread.

Outside the confinement of a small aquarium, goldfish can adapt to their environment and grow to be much larger than they would in a fish tank. As a result, they can become almost unrecognizable in both size and colour.

Anglers and lake-goers have spotted the bright orange colour of goldfish in lakes while fishing or swimming, which then sparks government intervention to remove them from the water. Without catching a glimpse of these fish in the water, it can be difficult to detect their presence.

These fish can create cloudy waters by disturbing the sediment at the bottom of water bodies as they feed, but turbidity in lakes is also caused by other factors, such as erosion or rain. This can make it difficult to use water clarity as a sole indicator for goldfish.

Goldfish have been introduced to waterways across the globe because of their popularity as pets and as an ornamental species. They have become one of the most widespread invasive fish in North America, and according to the Invading Species Awareness Program, there are established populations of goldfish in each of the Canadian provinces and in regions across the United States except Alaska.

In Ontario, they are established in both the north shore of Lake Erie and the west end of Lake Ontario. The province of Alberta has verified the presence of goldfish or koi fish in over 70 different locations.

Goldfish are one of the most available fish species in the aquaculture industry, often purchased as a low maintenance pet. They have even been distributed as prizes in games at fairgrounds, although this is now illegal in some parts of the world. Once their owners are no longer willing to care for them, they may be released into ponds or lakes which is one of the primary pathways of spread.

Because of their availability worldwide, their subsequent releases are equally widespread and damaging. In addition to being released by former owners, goldfish may escape from ponds or outdoor gardens and sustain life in nearby streams or rivers. Their ability to survive in low oxygen conditions as well as in a variety of habitats makes their escape and survival possible.

The spread of goldfish is a manageable issue. By not letting your goldfish loose, you can help slow their distribution in your local community.

Goldfish can form large populations in the wild that feed on algae, small invertebrates, and eggs on or near the bottom of a water body. These fish stir up the sediment when they feed, causing particles to float through the water and increase its turbidity.

Cloudier water limits the amount of sunlight that can reach the aquatic plants, reducing their growth and survival. This not only reduces the available oxygen in the water, but also directly contributes to algae blooms which can ultimately impact food webs and kill aquatic wildlife.

Goldfish can survive for a long time if released into a body of water with ideal conditions. Their long lifespans create plenty of opportunities for breeding and range expansion.

Without the constraints of an aquarium tank, they can grow and reproduce more rapidly. They also feed on a variety of species and quickly start to out-compete native organisms for resources.

Goldfish are thought to be carriers of Koi herpesvirus, which is a contagious herpes virus that causes high rates of mortality in carp and some related species, such as koi. Goldfish can also contract diseases when living in poor aquarium conditions, which can be passed to other fish if released into the wild.

The cost to remove goldfish and repair damages can be quite high. For example, it cost $150,000 USD to eradicate invasive goldfish that overpopulated West Medical Lake in Washington State (The Washington Department of Fish and Wildlife, 2018). In this case, goldfish released into the lake reduced native trout populations and severely compromised trout fisheries in the area.

Lower trout stocks impacted the number of anglers that visited the lake and reduced overall tourism. Wild goldfish can also lower the aesthetic value of the lake, resulting in even less revenue from visitors.

Goldfish are not currently listed as invasive on the federal Aquatic Invasive Species Regulations in Canada. They are not regulated as invasive species in Ontario, British Columbia, Alberta, Yukon, Manitoba and Quebec, but are prohibited as baitfish in Saskatchewan.

It is, however, prohibited at a federal level to release any aquatic species into a region or body of water where it is not indigenous. In other words, while owning a goldfish does not constitute prohibited behaviour in invasive species management, the act of releasing it is forbidden.

Reducing the spread of goldfish is as simple as not letting them loose in the wild. If you can no longer care for your goldfish, it’s essential that you don’t release it into a natural environment. Instead, consider the following:

Don’t do the following:

If you think you have spotted a goldfish, you can report your sighting in a few different ways: