Invasive species in a changing climate

Effects of climate change on invasive species can include:

A changing climate can affect species life cycles and their ability to spread into new areas.

Increased carbon dioxide (CO2) in the atmosphere leads to higher CO2 uptake in plants, which can increase herbicide resistance.

Changes to climate (including temperature, humidity, and rainfall) can create favourable conditions for increased spread of invasives.

Sleeper species are non-native species already present in an ecosystem that have potential to be invasive, but are limited by factors such as climate or other species.

Sirex woodwasp, for example, was introduced to Canada in 2005 and has since been limited to parts of Ontario and Quebec. Climate change could create favourable conditions for the spread of this species, leading to negative impacts on Canada’s important pine plantations. Identifying sleeper species and preventing their spread will protect vulnerable ecosystems and maximize resources.

Mountain pine beetle (MPB;
Dendroctonus ponderosae) is native to Western Canada, but has rapidly spread beyond its historical range in recent years. Warming winters have enabled spread into areas where the cold previously killed up to 98% of populations. MPB is now acting ‘invasive’ and threatens pine trees across Canada.

Healthy forests are carbon sinks that capture and store large amounts of atmospheric carbon and help offset the impacts of climate change. A MPB outbreak could turn Canada’s forests from a carbon sink to a carbon source, as killed trees release stored carbon back into the atmosphere – further accelerating climate change.

What can we do? 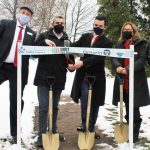