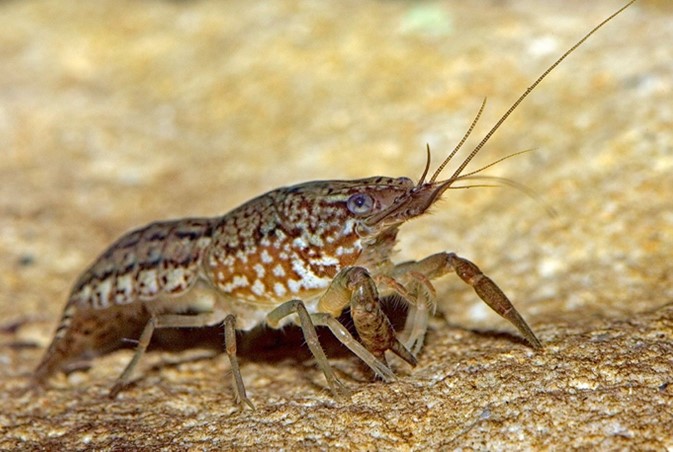 Marbled crayfish are small, freshwater crayfish that originated in the German pet trade industry in 1995. They have been sought after by aquarists for their colourful marbled pattern and were first sold into North America in 2004.

Marbled crayfish have been unable to establish wild populations in this region so far, but their high reproductive potential makes them a threat to Canada.

Learning how to identify and report marbled crayfish is important in preventing their wild release into Canadian landscapes.

Marbled crayfish are medium sized crayfish reaching anywhere from about 7.5-13 cm (3-5 in) in length, which is about the same size as the diameter of a standard baseball. Their elongated chelae (claws) are small and are usually about half the length of their carapace (back).

Marbled crayfish get their name from their appearance. They all have a marbled pattern that covers their back and claws (but their legs are one uniform colour). Even though they are genetically identical, they can differ in other traits such as colour. They vary in colour depending on their habitat, reflecting differences in diet.

Most individuals eating algae, plants, snails, and amphibians appear olive to brown in colour when found in the wild. It’s usually easier to see more colour variation in captive marbled crayfish, which can turn blue, red, and even green when given a special diet.

Regardless of overall colour, every marbled crayfish has a darker horizontal stripe on each side of their carapace and pleon (abdomen) that runs through lighter coloured areas.

Marbled crayfish usually live 2-3 years and, like all crustaceans, undergo a series of moults throughout its growing phase. They shed and regrow their exoskeleton to accommodate increases in body size as they grow and mature. Sexual maturation occurs relatively quick within the first 6 months of life when they reach about 4 cm (1.5 in), allowing marbled crayfish to reproduce multiple times throughout their lives.

Body size is a good indicator of clutch size as larger bodied females at the time of maturity are more likely to produce a larger number of eggs compared to smaller females. Reports on the number of eggs that an individual female can produce per clutch has varied, but it is estimated to be between 200 and 700 eggs depending on body size.

Developing eggs are carried under the female’s abdomen and take 2-3 weeks to hatch (depending on temperature). Eggs remain attached to the female for approximately 26 days of life (post-hatch), where they grow and subsequently moult. Their second moult signals the end of juvenile development, at which point offspring leave the safety of their genetically identical mother’s abdomen and become independent. They stay close to their mother for several weeks before going off to explore on their own.

Many marbled crayfish have also been found in rice paddies in the wild. They prefer habitats with water temperatures that range between 18 and 25 ºC. They can survive in much colder and warmer conditions, but the likelihood of mortality increases with each passing week.

Marbled crayfish originated quite recently in evolutionary time, with the first known appearance occurring in 1995 at an aquarium in Germany. It is likely that mutations in a closely related species (the slough crayfish) led to the emergence of marbled crayfish as an entirely new species.

Marbled crayfish have been dispersed primarily through the pet trade, which has given them the opportunity to establish wild populations in several European countries, as well as Madagascar and Japan.

Trading of marbled crayfish has become very popular, but they can quickly outgrow home aquariums through rapid reproduction. When this happens, marbled crayfish are usually sold or released into bigger pools of water in the wild (such as garden ponds). From there they can spread out and colonize a diverse range of freshwater aquatic habitats.

The first reported sighting of marbled crayfish in North America was in 2004. While there are currently no known wild populations in Canada, their potential to be released from household aquariums into the wild is high given their ability to rapidly produce hundreds of clones within a few months.

Marbled crayfish are now listed as a prohibited species under Ontario’s Invasive Species Act, meaning they cannot be bought, sold, traded, released, or possessed in Ontario.

If you spot a marbled crayfish in the wild, please report the sighting to EDDMapS.

Explicit evidence on the impacts of marbled crayfish is limited, but speculations can be made based on their life history traits. It may also be helpful to look at the population booms in Madagascar to gain some insight as to how they might impact Canada.

Marbled crayfish are thought to outcompete native crayfish species for resources like food and space, with their faster growing rates, very large clutches, and aggressive behaviour. Outcompeting native species can alter food webs and reduce biodiversity. They also have the potential to introduce disease such as crayfish plague to native species, which can eliminate entire populations.

People in Madagascar have reported negative impacts on the fishing industry, suggested to be a result of marbled crayfish predating on young, small fish. If introduced to Canada, it is possible that marbled crayfish will cause similar economic hardships in the freshwater fishing industry. This species also has the potential to affect agricultural practices, as it has been reported to reduce rice yields by damaging plants in Madagascar.

Prevention is key for stopping the introduction and spread of marbled crayfish. These crayfish are very popular in the pet trade industry and are usually purchased for home aquariums.

Refusing to buy or sell marbled crayfish is a huge step forward in preventing their introduction into the wild. If an aquarium already has marbled crayfish populations that are cloning rapidly, do not release them into yards or bodies of water – it is illegal to do this. If you need to clear them out of a tank, several sources recommend safe and humane disposal techniques (this source also outlines which techniques are inhumane and why).

In short, crayfish should be stunned first to eliminate the possibility of pain. Electrical stunning and splitting are thought to be two of the more efficient methods that can be applied for a quick, pain-free death.

Increasing public awareness on the invasive potential of marbled crayfish is also important. The more people that know how to properly identify, report, and manage this species the better.