As their name suggests, Asian giant hornets are native to temperate regions in China, Korea, Japan, and India. Along with their name and aggressive appearance, their size is quite intimidating, ranging from 3.5 to 5 cm in length. This qualifies them as the largest species of hornet in the world (Government of Ontario).

These hornets were first spotted in Canada in August 2019 on Vancouver Island. Following the first sighting, a pest alert for Asian giant hornets was issued by the Ministry of Agriculture in British Columbia (Invasive Species Compendium).  They pose a threat in their non-native range as they feed on insects and are predators of honeybees. They feed on individual honeybees from spring to mid-summer and can work their way to attacking full honeybee colonies, killing the entire colony in less than 24 hours (Government of Ontario).

Asian giant hornets are commonly referred to as ‘murder hornets’ in the media. Their name has led the public to believe they present a terrible danger or threat to humans. Contrary to popular belief, they got their nickname from their predatory habits towards insects, including honeybees! They will only attack humans if their colonies and nests are being threatened. 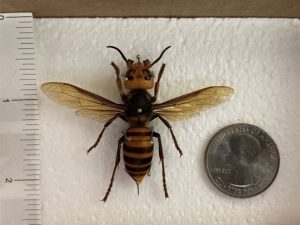 After a long winter underground, the Asian giant hornet queen emerges in late April to early May and begins to establish her new nest in the ground. The queen forages and performs all the work including constructing the nest, egg-laying, and caring for the young.

These tasks are then passed over to the first set of workers who emerge as early as June and take over the duties within two to four days. The queen then focuses solely on laying eggs while the workers focus on foraging, attending the queen, and constructing larger cells in the nest.

By the end of August through October, only the queens and males (drones) are reared. During this stage, the workers will start attacking honeybee colonies and other insects to meet the growing food demands of the colony. It is during this time that mating occurs and the founding queen of the nest dies. No new workers are emerging, and the nest begins to die out.

After this, inseminated queens search for their ideal location to overwinter and the cycle repeats in the springtime (Cobey S et al., 2020). 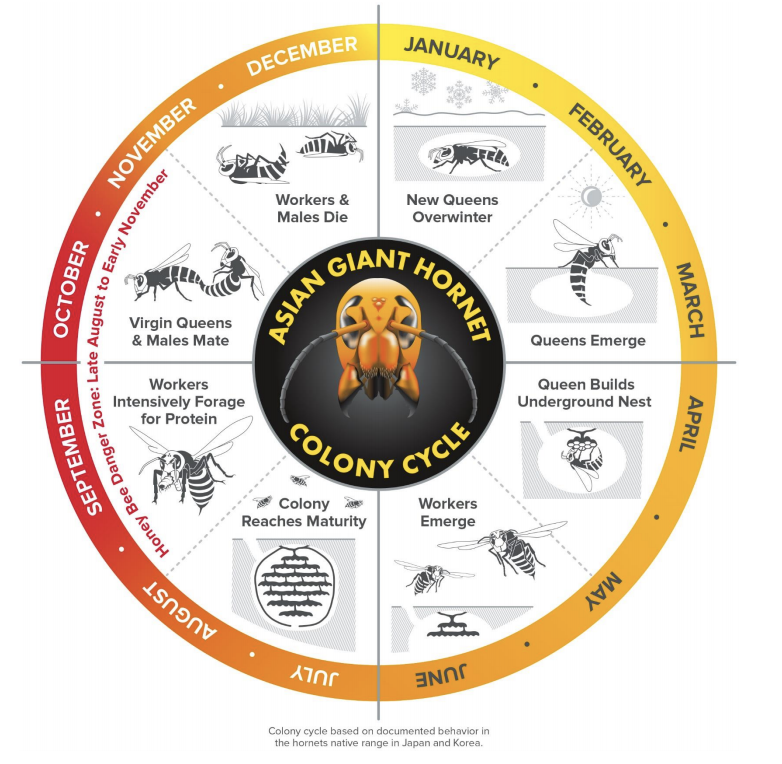 Photo credit: The Asian Giant Hornet: What the public and beekeepers need to know

Asian giant hornet colonies nest underground together with one queen and many workers. Being underground, colonies are typically difficult to locate. They create nests underground in a variety of ways including digging, occupying pre-existing tunnels, and using spaces by tree roots.

In terms of the overall ecosystem this species prefers, they tend to gravitate towards low forests and mountains, and avoid high-altitude climates and plains (Pestworld.org). 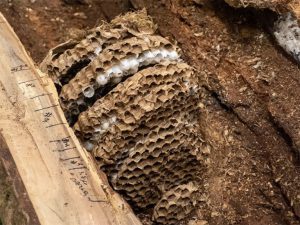 Since Asian giant hornets nest below the surface, nest sightings are not common. Seeing the hornet itself will be the first sign that there is a potential outbreak.

Proper identification and reporting can help with this, as they are commonly mistaken for native or naturalized hornets in Ontario such as the European hornet (Government of Ontario). The graphic above can be helpful in safely identifying these insects.

Asian giant hornets are native to Southern Asia, from India through China, into Japan and Korea. They are known for inhabiting the lower altitude forest and avoiding large plains and high-altitude regions. They have been found in the Nanaimo, BC area (August 2019) as well as south into Washington state (December 2019). Research is currently underway to track and identify whether the Asian giant hornet will spread over the Rocky Mountains without human assisted movement. 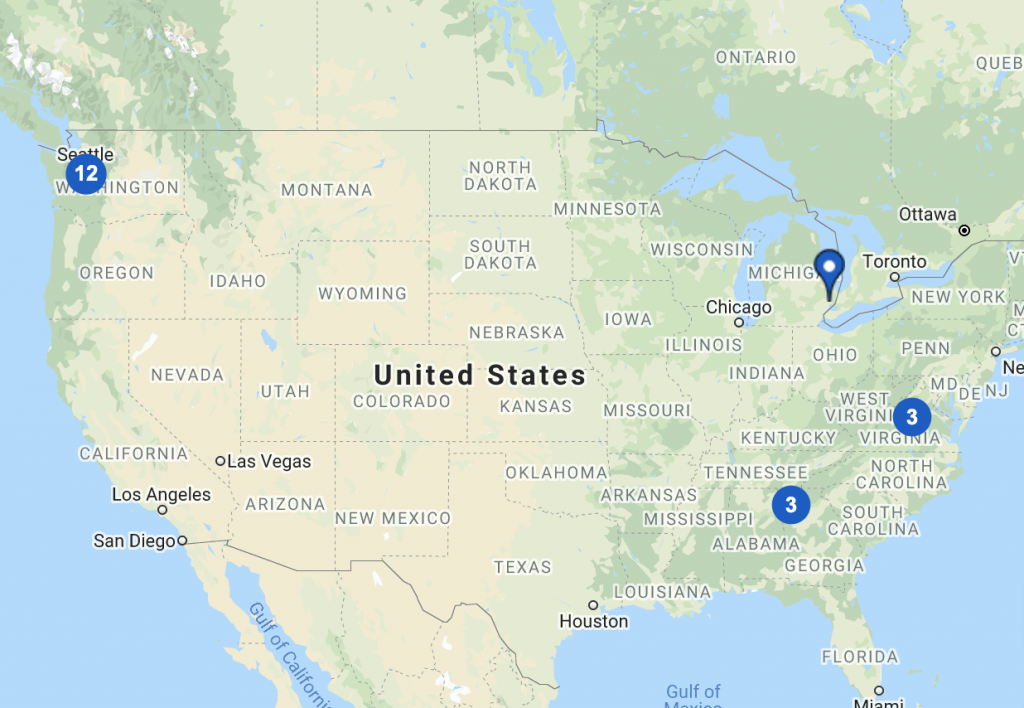 Asian giant hornets can be compared to the lions and great white sharks of the insect world. They are carnivores that kill other insects for food. Unfortunately, they can have a large impact on honeybee populations and can cause serious damage to a honeybee hive.

A colony of Asian giant hornets can kill up to 30,000 honeybees in a few hours. The destruction of honeybee populations can have large impacts to the environment and food production industry, because of their important role as pollinators.

Asian giant hornets can have large impacts to honeybee populations, which affects native plants, crop yields, and the honey industry. As well as impacting the food industry, hikers and other recreational activities can be affected by these hornets. If the nests are disturbed, Asian giant hornets can become aggressive and territorial, chasing hikers away from trails.

The prevention of spread of these invasive hornets is the most crucial control method. This includes destroying nests when found, trapping, and physical or chemical destruction. These methods are all to be done AFTER properly being reported and only by a professional (Government of Ontario).

How to report a sighting of Asian giant hornets or their nests:

By learning how to properly identify and prevent the spread of Asian giant hornets, we can protect ecosystems and insect species from this carnivorous pest!