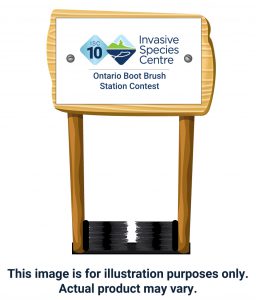 Invasive species can hitchhike on people’s boots and clothing, equipment, and pets from other areas, and damage the natural areas where we love to hike and camp. When we brush debris containing invasive plant seeds off our feet, clothing, and equipment, we stop harmful invasive plants, insects, and diseases from infesting these special areas. Many of our parks and natural spaces are experiencing record numbers of visitors, and so these community boot brush stations are a small step to help provide new ways to prevent the spread of invasive species.

Boot brush stations are effective at helping stop the spread of invasive species, as trail users can use the boot brush to remove mud, dirt, and seeds from their shoes before and after using a trail.

Congratulations to these organizations on being selected as a winner of a Boot Brush Station!

Thank you to everyone for entering the contest!

The Invasive Species Centre would like to thank the Government of Ontario for its support.