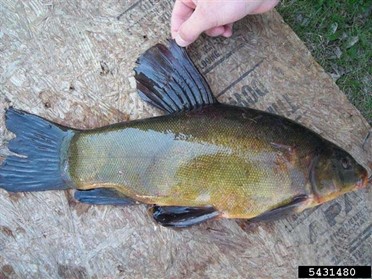 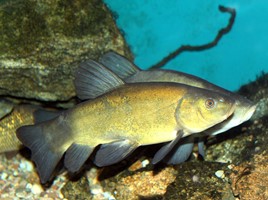 Did you know? Tench is sometimes known as “doctor fish” because they were thought to influence healing in other fish. Ironically, their behaviours in Canadian waters can be harmful to the balance of ecosystems.

Tench is an attractive species of fish that are invasive to Canada. Indigenous to Europe and western Asia, tench was introduced to the United States in the 19th century as food and sport fish.

Later, in 1986, they were brought illegally to a farm in Quebec where they accessed the St. Lawrence River via the Richelieu River and have since been spotted as far as the Bay of Quinte in Lake Ontario.

Because of their adaptability, tench have invaded almost every corner of the planet aside from Antarctica and have caused notable damage in regions where they have become prolific. This striking, olive-coloured fish competes with native species like minnows, bullheads, and suckers by eating significant quantities of snails and insect larvae.

These feeding tendencies could threaten other species and biodiversity by increasing competition and promoting algal blooms.

Tench have just recently become regulated in Ontario under the province’s Invasive Species Act. Tench is already established in the areas of Quebec and the Columbia watershed in British Columbia.

Tench is an objectively good-looking fish and is easily distinguishable among other native species. Their bronze or olive-coloured scales coupled with their red or orange eyes have likely made them desirable among sport fishermen.

They bear very small scales which are embedded in thick skin and their dark fins are rounded without spines.

Tench are dark on the back and lighter on their underside and are often between 20-25 cm long with a deep, thin body. They have a single barbel from each corner of their mouths and only have one dorsal fin.

Juvenile tench may be confused with common carp or other baitfish species, which may promote their spread.

Tench can live to be up to 20 years old. They may reach a maximum length and weight of 70cm and 6kg, respectively.

A female tench becomes sexually mature between the ages of three and seven whereas a male tench becomes sexually mature from the ages of two to three years (Nordstrom, 2011). Once mature, reproductive tench spawn on aquatic vegetation in shallow, densely vegetated waters. They can be found spawning multiple times throughout the summer (May to August in Europe) when temperatures reach 18 °C in low flow water conditions. During this time, they can release hundreds of thousands of eggs per kilogram of body weight (Avlijaš, Ricciardi, & Mandrak, 2017).

Tench is moreover highly resistant to disease because of their small scales and a mucus layer which cover their bodies (Nordstrom, 2011), despite themselves being transmitters of parasites and disease.

Tench feeds on shellfish such as snails and insect larvae in order to survive.

The fish are active primarily at night, spending most daylight hours under the cover of macrophytes or benthic substrates (Avlijaš, Ricciardi, & Mandrak, 2017).

They are hardy fish that can live in temperatures from 0-24 degrees Celsius. They prefer lakes and slow-moving waterways with ample vegetation and muddy bottoms. Evidently, this encompasses a broad range of suitable habitat which has driven the success of populations worldwide.

They can even survive when oxygen is low, survive lengthy periods out of water, and can be transported between waterbodies in wet sacks. This tolerance for low oxygen allows them to thrive in the benthic areas of lakes and eutrophic waters.

The impacts of tench are not widely known in Canada and therefore it is difficult to quantify signs and symptoms. According to the Global Invasive Species Database, tench are able to survive in degraded environments which causes confusion as to whether tench themselves contribute to this degradation or simply inhabit a niche that native fish cannot occupy.

It’s possible that most environmental impacts may be related to the wide range of organisms consumed by tench (Global Invasive Species Database). It is expected in Canada that biodiversity loss would also be a by-product of a tench invasion which would be notable in terms of fewer native species living in suitable tench habitats.

Tench is a freshwater fish that is indigenous to Europe and western Asia. They were initially introduced to parts of the United States in the early 19th century as sport fish. Later, the fish were imported illegally to a farm in Quebec where they escaped into a tributary of the St. Lawrence River after the farm’s owner found that there was not enough interest in the market for tench.

Presently, the Lake Champlain, Richelieu River, and Lake St. Pierre populations in Quebec are well established and recorded at high densities (Avlijaš, Ricciardi, & Mandrak, 2017). Tench has also established in the Columbia water system in British Columbia and have been introduced to the Okanagan.

The fish have the ability to pass through locks, dams, rapids, and seaways and can survive out of water for a long period of time. Tench is accordingly tolerant of harsh environmental conditions, including turbulent transportation. Although tench is not currently established in Ontario, the fish presently have access to the Great Lakes via the St. Lawrence and have been found as far as Lake Ontario.

Experts suggest that the spread of tench into the Great Lakes could occur through human-mediated pathways or through further dispersal through connecting waterways, such as illegal stocking in nearby ponds (Avlijaš, Ricciardi, & Mandrak, 2017).

Moreover, when tench is in its juvenile state, they can also be confused as baitfish and spread by unintentional release of bait buckets.

In addition to their initial use as sport fish, the golden variety of tench is presently artificially bred and may resemble Goldfish. Sometimes used as ornamental fish in garden pools, tench may belong to the aquaculture trade in some regions.

To view the most updated map of where tench have been located, visit EDDMapS.org

The impacts of tench continue to be researched and understood, but scientists have not comprehensively studied the effects of tench on native species in Canada (Ontario). It is known, however, that tench competes with native minnows, bullheads, and suckers for food and eat large quantities of snails and insect larvae which could therefore disturb the natural balance of freshwater ecosystems.

Avlijaš, Ricciardi, and Mandrak, also predict that tench would promote an increase in the transmission of parasites, including cestodes and copepods (tapeworms and crustaceans), to other cyprinid fishes as well as propel new pathway for transmission of the cestode Ligula intestinalis (a species of tapeworm) to piscivorous birds, with negative effects on local waterfowl populations.

Tench could additionally act as a new reservoir for the rhabdovirus (a virus) that causes spring viraemia (a viral infection of the bloodstream) of carp and thus may contribute to increased outbreaks of the disease (Avlijaš, Ricciardi, & Mandrak, 2017).

Tench are benthic fish, meaning they are bottom-dwelling, and would likely compete with other native benthic fish including redhorses and suckers. As a result, local reductions in invertebrates (mainly mollusc populations) could also take place.

By feeding heavily on snails, which graze on algae, tench may also contribute to algal blooms which would decrease overall water quality and lead to further environmental disruption. In addition, the aggressive feeding behaviours by tench would stir up sediments, leading to cloudy water.

As alluded to in the previous section, the effects of tench on native ecosystems have not been studied in Canada and therefore the economic and social impacts cannot be understood comprehensively.

Though like any invasive species, the establishment of tench in Canadian waterbodies would likely be costly to governments and municipalities because of decreased water quality and impacts on biodiversity.

Tench has been shown to overwhelm natural ecosystems in other parts of the world and within Quebec in Canada, and accordingly, losses to commercial fishing, subsistence fishing, recreational fishing, effects on beach quality and wildlife viewing are possible as socioeconomic impacts.

According to anecdotal evidence from the United States, for instance, tench has a history of being a nuisance species wherein it settles in high densities and has sometimes been considered a detriment to sport fisheries (Avlijaš, Ricciardi, & Mandrak, 2017).

Tench has been adopted among 13 species to be regulated in Ontario. Tench is now considered prohibited in the province, meaning they cannot be brought into, deposited, released, possessed, or transported and cannot be propagated, bought, sold or traded in Ontario.

There are currently no strategies in place in the province to manage tench because they have not established in Ontario waters. Tench is also prohibited in British Columbia as part of the aquaculture trade.

By learning how to identify and prevent accidentally spreading this aquatic invasive species, we can protect our lakes! If you’ve seen tench or another invasive species in the wild, please contact the toll-free Invading Species Hotline at 1-800-563-7711, or visit invadingspecies.com to report a sighting.

Battling the tench fish invasion: ‘Like Game of Thrones under water.’

On the doorsteps of the Great Lakes, tench: what is it, how did it get here, and what now