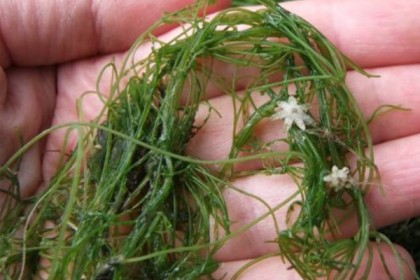 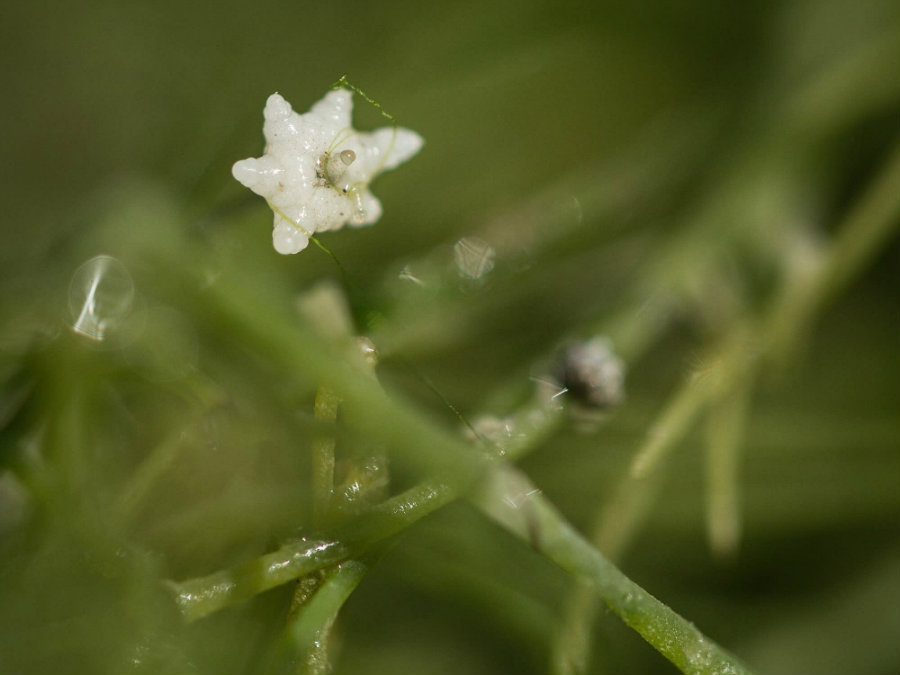 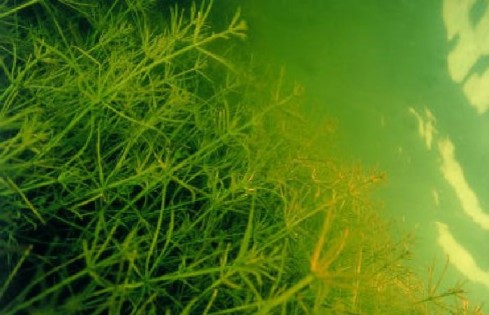 Did you know:  Only male Starry Stoneworts have been identified in North America. New individuals arise asexually (as clones) from small fragments of their bodies, making them easy to spread to new locations on boats and trailers.

Starry Stoneworts (SSW) are a type of plant-like algae called macroalgae that live in freshwater. They get their name from the star-shaped structures called bulbils that they use to anchor themselves to the lake bottom. The native macroalgae in Ontario do not have these bulbils. Starry Stonewort is native to parts of Europe and Western Asia and was first documented in Ontario in 1978. SSW has invaded the Great Lakes, Lake Simcoe, the Trent Severn Waterway, even small inland lakes in Ontario, Michigan, Wisconsin, and New York. They can reach heights of up to 10 metres in the water column, and create dense mats called “pillows” that can become so thick that they replace native macroalgae, and displace aquatic plants and animals. Starry Stonewort can reproduce from small fragments broken from the main body, making recreational activities a key factor in spreading the species. Boat motors will cut SSW into fragments, which become rooted and grow. Improper cleaning of boats and trailers could take these fragments to new locations. Starry Stonewort can also be spread within the same waterbody through currents, waves, and recreational activities. In extreme cases, SSW can restrict recreational activities entirely. Be sure to wash your equipment when boating, and if you think you’ve found SSW, report it using the Invading Species Hotline (1-800-563-7711) or on EDDMaps.

Starry Stoneworts are a type of macroalgae that resemble aquatic plants, but instead are plant-like forms of algae that feed on nutrients in the water where they live. They reach heights from 30 cm to 10 m in the water column (Monkman, 2020). Starry Stonewort has white, star shaped bulbils on the main axes, and branchlet nodes (Larkin et al., 2018). Bulbils are seed-like structures; they are distinct to SSW and not found on native species (Harrow-Lyle & Kirkwood, 2021). Bulbils form at the nodes (junctions) of rhizoids (root-like structures that anchor the grass-like body to the substrate). The stem is smooth green, and the branchlets are in whorls of 4 to 6. In Ontario, SSW can have different physical characteristics depending on the environment; these differences can even be seen in individuals in the same lake. This makes SSW especially difficult to identify and has led to misidentifications (Harrow-Lyle & Kirkwood, 2021).

The peak growing time is July to September. Within its known invasive distribution, lakes with more human activity are more likely to have SSW populations, suggesting humans aid in the spread (Sleith et al., 2015). In North America, only males have been observed, meaning that Starry Stonewort only reproduces asexually through fragments and bulbils (Larkin et al., 2018).

Starry Stonewort is an invasive macroalgae native to parts of Europe and Western Asia. It was first documented in Ontario in the St. Lawrence River in 1978. Starry Stonewort has since invaded the Great Lakes Basin, Lake Simcoe, and the Trent Severn Waterway (https://www.lsrca.on.ca/Pages/Starry-Stonewort.aspx). In Ontario, SSW has been found in the Huron-Erie Corridor, Lake Ontario (Midwood et al., 2016), Lake Simcoe and other inland lakes in the Kawarthas. In the northern United States, Starry Stonewort has been identified in small inland lakes in Michigan and New York (Midwood et al., 2016).

Starry Stonewort spreads quickly and can reproduce from fragments that are easily distributed within and between water bodies (https://starrystonewort.org/facts/). It can form large dense mats called “pillows”, which can displace native plants and algae. Large mats of Starry Stonewort could potentially alter the water chemistry and nutrient cycling, which in turn can restrict nutrients available to native plants and fish (Larkin et al., 2018). Starry Stonewort aggregations can potentially release phosphorus otherwise bound in the sediment, triggering potentially toxic algal blooms and growth of cyanobacteria (Harrow-Lyle & Kirkwood, 2020). These extreme cases of Starry Stonewort will additionally restrict recreation opportunities like fishing, boating, and swimming (Ginn, 2021). Economic impacts to shorelines and marinas along with increased public complaints have also been reported (Ginn, 2020).

What Can You Do?

What can you do? 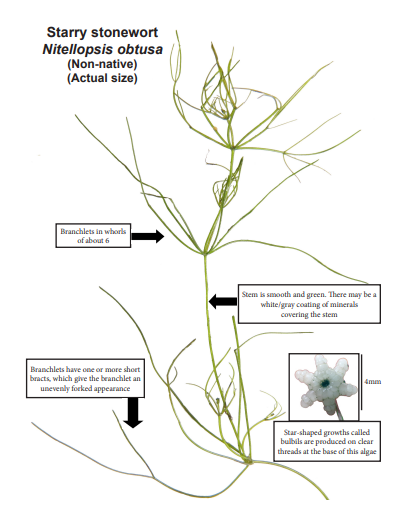 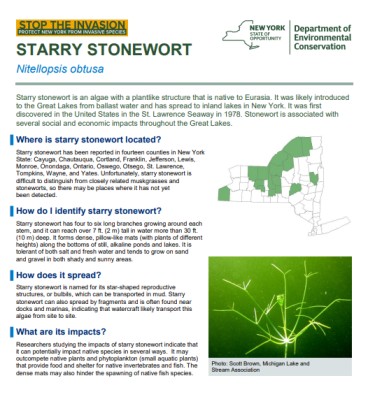 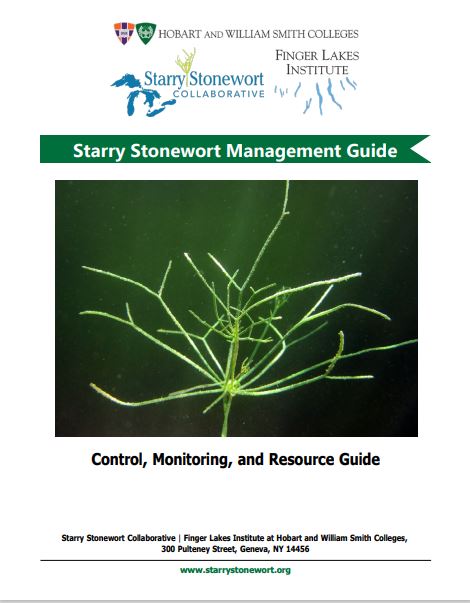 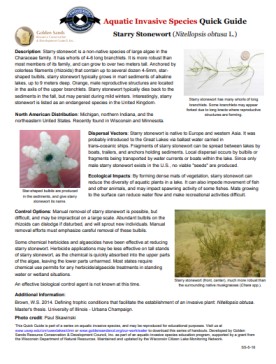 Ginn B., 2021. Trends in submersed aquatic plant communities in a large, inland lake: impacts of an invasive by starry stonewort (Nitellopsis obtusa). Lake and Reservoir Management. 37(2): 199-213.

Harrow-Lyle T., Kirkwood A.E. (Producer), 2021. Investigating the distribution of starry stonewort in Ontario lakes and its role as an ecosystem engineer [Video].