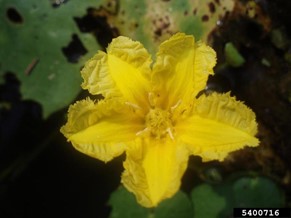 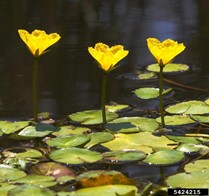 Did you know? Yellow floating heart is often introduced to natural waterways because of intentional or unintentional release from aquaculture or artificial ponds.

The name of the yellow floating heart is deceivingly charming. The bottom-rooted, aquatic perennial with floating heart-shaped yellow leaves can place significant pressures on the ecosystems that it invades by crowding out indigenous plants and altering the chemical composition of the water.

Initially introduced as an ornamental plant in Canada and the United States, yellow floating heart is an invasive aquatic plant that can produce dense mats of leaves in the form of a floating canopy, which results in reduced flow, reduced light penetration, lower oxygen levels, and altered nutrient cycling of waterways.

Yellow floating heart is indigenous to parts of Europe and Asia and its visual appeal proliferated its spread through aquaculture in North America. Recreational activities such as swimming or boating can be impeded with the invasion of the yellow floating heart because of the plant’s ability to overwhelm waterways in the form of dense mats.

There is currently no federal legislation that regulates yellow floating heart distribution in Canada.

As its namesake suggests, the yellow floating heart has round, floating yellow flowers that may look similar to heart shapes. Each peduncle (or stalk) that rises a few inches above the surface of the water can grow between two to five flowers and features five uniquely fringed bright yellow petals ranging from 3-4 cm in diameter (Centre for Agriculture and Bioscience International, CABI).

The leaves of a yellow floating heart plant may be 3-15cm in diameter and sit atop long stalks attached to underwater rhizomes (CABI). Leaves are green to yellow green in colour above the water and are often a purple colour on their underside (CABI).

The roots of the yellow floating hearts are attached to the waterbed’s floor and are adventitious in nature, meaning they can grow after injury to roots or to main stem, branch, or other tissues (Pallardy, 2008). This can allow for their successful spread due to the process of fragmentation, which is growth due to stem breakage.

Yellow floating hearts can be sometimes mistaken for water lilies, another aquatic plant that bears flowers.

Yellow floating heart plants can cumulatively form dense mats that cover entire waterways from the water floor to the surface. This characteristic can be overwhelming for indigenous species, but a notable feature in terms of identification. 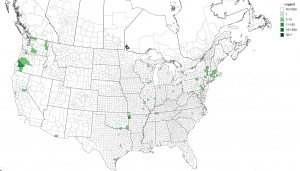 The image shows the current distribution of yellow floating heart from EDDmapS (2021).

Because of its striking appearance, yellow floating heart was initially introduced to Canada and the United States as an ornamental plant that blooms throughout most of the growing season (Darbyshire & Francis, 2008).

In Canada, it has arrived in a number of regions as a result of being deliberately planted or dumped and has since been found in Alberta, Newfoundland, Nova Scotia, Quebec, Ontario and British Columbia (Darbyshire & Francis, 2008).

The aquatic invasive has also been used to deprive other submerged aquatic “pests” of sunlight to eliminate them; in other words, replacing one pest with another (Darbyshire & Francis, 2008).

The spread of yellow floating heart is preventable with education. Becoming aware of what you are purchasing for aquaculture and from internet sources is crucial in keeping it out of areas where it can be harmful. The initial distribution of this plant occurs primarily through the aid of humans and its proliferation is successful because of its adaptability.

Yellow floating heart has the capacity to reproduce by different means, including insect and self-pollination (Harris, 2014). Because of these different means of reproduction, it has high reproductive rates.

Insects are attracted to the bright flowers, and exchange and transport pollen for glucose-rich nectar, which allows the plants to propagate (Harris, 2014). Self-pollination also occurs between either a single flower or through different flowers, but this occurs less frequently to avoid inbreeding (Harris, 2014).

These processes occur within hours of the flower opening, and by the end of the season, seeds are released and form floating chains (Harris, 2014).

Yellow floating hearts are adaptable, and therefore, depending on the aquatic habitat, seed dispersal may be governed by currents, digestion by amphibious animals or birds, or attachment to boats (Darbyshire and Francis, as quoted in Harris). The hardy seeds have the capacity to float for months, but if disturbed by rain, they sink to the bottom and their life cycle begins (Harris, 2014).

Yellow floating heart is a tolerant plant that thrives in slow moving rivers, lakes, reservoirs, and ponds (CABI). These waterways, however, are not its exclusive habitat as yellow floating heart also has the ability to grow in damp mud, swamps and wetlands and even ditches, canals, waterways, and “break-through” pools of dikes (CABI).

It thrives in areas where the water is only 1-2 metres deep and when clay, organic mud, or a mixture of both, make up the water’s floor (Harris).

The adaptability of the yellow floating heart alongside its widespread habitat allows it to successfully invade many different regions.

Yellow floating heart invasions are identifiable by the establishment of large dense mats of plants that overtake a region. The plants can be observed for most of the growing season and are bright and yellow in appearance.

When yellow floating heart invades, it may cause a variety of issues including damaged ecosystem structures, habitat alteration, modified hydrology, nutrient regimes, and monoculture formations (CABI).

Ecologically, it reduces native biodiversity, and threatens the loss of native species. These symptoms can be dangerous for natural habitats and have far-reaching direct and indirect impacts.

The ecological impacts of yellow floating heart can be significant.

Because of their ability to form such grand colonies, dissolved oxygen levels are further affected through decomposition of large amounts of biomass (Darbyshire & Francis, 2008). The consequences of yellow floating heart include increased competition and displacement of indigenous vegetation, a reduction of biodiversity, and affected faunal communities (Darbyshire & Francis, 2008).

Socially, swimming and boating opportunities along impacted waterways may be reduced because of the plant’s ability to overcrowd habitats.

Economically, problems relating to drainage and control measures of the plant can place direct pressures on municipalities striving to control them and can be costly to remove.

Yellow floating heart is now considered “restricted” in Ontario, meaning it cannot be deposited or released in the province or brought into a provincial part or conservation reserve.

In Alberta, it is already listed as invasive under the Alberta Fisheries Act (Invasive.org). There is otherwise no Canadian federal legislation concerning yellow floating heart and likewise no federal legislation in the United States, only some state regulations (Darbyshire & Francis, 2008).

Most populations of yellow floating heart in Canada occur in small ponds where eradication may still be possible (Darbyshire & Francis, 2008).

Education and awareness are some of the most valuable tools in effectively informing the public to not release the plant into natural waters or purchase them through online channels, and how to identify them if located in the water to prevent population spread.

If you think you’ve found Yellow Floating Heart in Canada, report it on the EDDMaps website, or if you’re in Ontario, you can also call the Invading Species Hotline at 1-800-563-7711. If possible, take a photo of the plant.