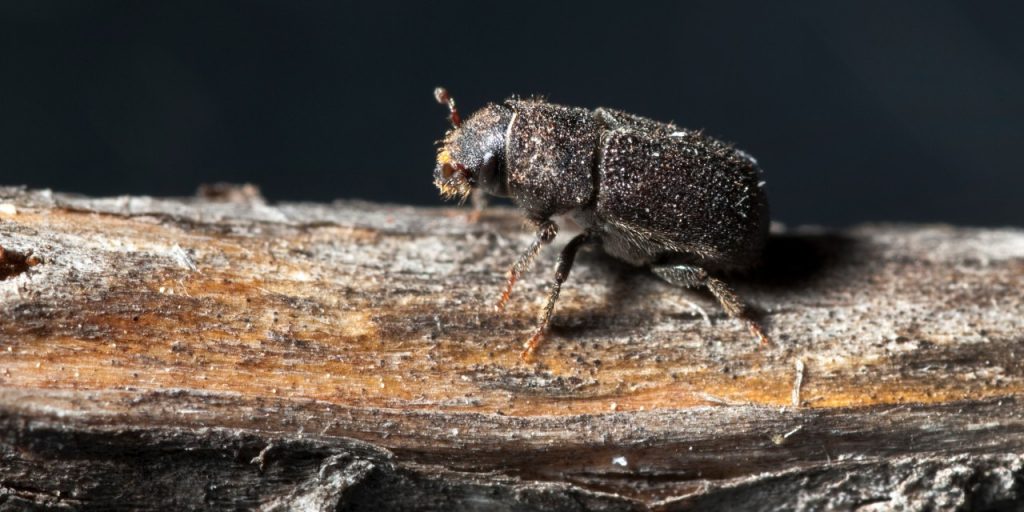 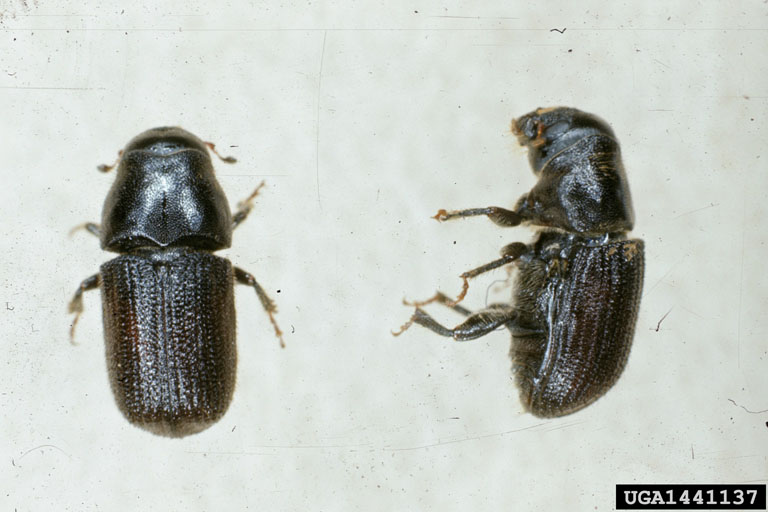 The mountain pine beetle (MPB) is native to western Canada, but has expanded beyond its historical range and could become invasive, due to climate change and past forest management programs. Up to 98% of MPB population is normally killed due to winter temperatures; however, with recent warmer winters, more individuals are surviving and the population has been able to grow more rapidly. MPB is extending further north in British Columbia and further north east in Alberta. Also, with regional fire suppression programs and harvesting programs that focused on other species, large expanses of lodgepole pine, MPB’s normal host tree, were left behind and allowed to reach an age at which they become more susceptible to the beetle.

Jack pine, which stretches across the Canadian Shield into Ontario, is also susceptible to MPB infestation. Mountain pine beetle has not yet been detected east of Alberta but poses a significant threat to the area. Native to Western Canada, the MPB could become a devastating invasive species if it reaches the pine forests in Eastern Canada.

The majority of the MPB life cycle occurs underneath the bark. Adult beetles bore into the tree where they will mate. The female will then burrow vertically up the tree underneath the bark, laying eggs along the way. The eggs hatch into larvae which burrow linearly away from the main gallery. The larvae spend the winter under bark, and continue to feed into the spring. During the summer, the larvae pupate, and transform into adult beetles. By mid-July, the fully formed adults begin to emerge from the bark, and fly to a new host tree. Adult beetles continue to emerge from an infested tree throughout the summer and into early fall. A key stage in the life cycle occurs when the beetle transmits a blue stain fungus to the tree. Attacking adult beetles carry fungal spores within a specialized sac (mycangium) on the maxillary cardine (mouthparts). The fungus gains access to the tree, affecting water transport, and eventually overcoming the tree’s defence system (NRCan, 2012).

The main host is lodgepole pine (Pinus contorta), though MPB can attack almost any species of pine. Impact on jack pine (Pinus banksiana) is of particular concern as MPB begins to spread into the jack pine dominated Canadian Shield.

Signs and symptoms of a MPB infestation include:

Depending on environmental conditions and the severity of the attack, it can take up to four years for the tree to lose its needles.

This foliage colour can be seen during aerial surveys, and is useful for detection and distribution mapping (NRCan, 2012).

When beetles bore through the bark and dig galleries, they produce a type of sawdust called “frass”. Frass can be seen in the bark and on the ground surrounding the trunk of the tree. When a healthy tree is under attack, it will produce a thick resin to deter beetle infestation. Known as pitch tubes, this hardened resin can be found on the bark of affected trees. Mountain pine beetles also introduce a blue-stain fungi (Grosmannia clavigerain) to the sapwood of the pine, which helps to kill the tree. The fungi give a blue-grey appearance to the wood (Parks Canada, 2009).

Distribution
Mountain pine beetle is considered a native species to Western Canada. Recently, MPB has expanded beyond its traditional range, extending further north in British Columbia and further north east in Alberta. It is now considered an invasive pest, as it has spread beyond its native range. Distribution of mountain pine beetle in Canada (Canadian Forest Service, 2011), showing population spread north towards Northwest Territories, and east towards Saskatchewan.

Mountain pine beetle is an insect, native to western North America, where its main host is lodgepole pine. The beetles invade the trunk and overwhelm the tree’s ability to produce resin to drown or pitch out the beetles.  Once inside the trunk, the beetles and their larvae kill the tree by feeding on the phloem, which cuts off the transport of nutrients in the tree. MPB adults carry blue-stain (Grosmannia clavigerain) fungal spores on their bodies, which are introduced into host trees at the time of attack. Once introduced into tree, the blue stain fungi spread rapidly, discolouring the wood. The beetle and the fungi work together to kill the tree, by cutting off water transport.

As a result of its negative impacts on pine species and the forest industry, MPB has become one of the most devastating invasive forest pests in Canada, resulting in huge ecological, economic, and social costs. Currently, there are no populations in eastern Canada, however reports have predicted that climate change may allow the beetles to spread north and east into other provinces and territories. In fact, the beetle has already spread far outside of its native range and has reached within 50 kilometers of the Saskatchewan border. Northern Ontario is particularly at risk to the impacts of MPB because of the high concentration of jack pine across the boreal forest. If MPB becomes established in eastern Canada and other eastern provinces, it will affect forest management plans, wood supply planning, fire frequency and severity, wildlife habitat, biodiversity, watershed management, recreation, and property values

The mountain pine beetle has already had significant economic impact on the forest industry in Western Canada and on Canada’s economy. The cost of fighting the insect in western Canada has been staggering. Since 2001, the BC government has spent more than $917 million fighting the beetle. The Government of Canada has committed $340 million since 2002 and has made a commitment for an additional $800 million. The BC situation has also resulted in excess supply of low quality and low priced pine timber salvaged from affected forests. The depressed lumber prices resulted in increased softwood lumber tariffs imposed by the US (which increases export costs), and made it difficult for eastern mills (i.e. Ontario and Quebec) to compete with the BC lumber.

Should the beetle spread to eastern provinces, its impacts on jack pine, red pine, and white pine could destroy the wood supply for industries that rely on pine forests. As seen in Western Canada, the economic costs of infestation can be extremely high.

Mountain pine beetle has ravaged immense areas of western Canada, having affected approximately 16 million hectares of forest throughout the region, dramatically changing the landscape and ecology. If the beetle spreads east, it has the potential to result in extensive tree mortality to the jack pine, red pine, and white pine dominated boreal forest. This would in turn alter our forest ecosystems and biodiversity, increase fire hazards, and reduce habitat for native wildlife.

If mountain pine beetle reaches eastern Canada, it could have significant impacts on forestry jobs, which many communities in northern regions rely on. In Northern Ontario, the $11.9 billion forestry industry, which supports more than 55,000 jobs, faces the risks of invasive pests such as the mountain pine beetle. A decrease in pine supply due to MPB could lead to mill closures and would have negative impacts on forest-based communities.

Detection for mountain pine beetle is accomplished using landscape scale surveys. Usually, aerial surveys are performed from fixed wing or rotary aircraft, where technicians use a combination of sketch mapping, GPS coordinates, and aerial photography to record the areas where MPB has attacked the trees. Aerial surveys are usually followed by localized ground surveys, which provide a more detailed account of the level of infestation (Wulder et al., 2004).

AL Carroll, SW Taylor, J Régnière, L Safranyik… – 2003 – stg-wedocs.unep.org
The current latitudinal and elevational range of mountain pine beetle is not limited by
available hosts. Instead, its potential to expand north and east has been restricted by
climatic conditions unfavorable for brood development. We combined a model of the impact …

WH Romme, DH Knight, JB Yavitt – The American Naturalist, 1986 – journals.uchicago.edu
We consider the hypothesis that mountain pine beetles function as cybernetic regulators of
primary productivity in ecosystems of lodgepole pine forest through their selective killing of
dominant trees and the subsequent redistribution of resources. Following a recent major …