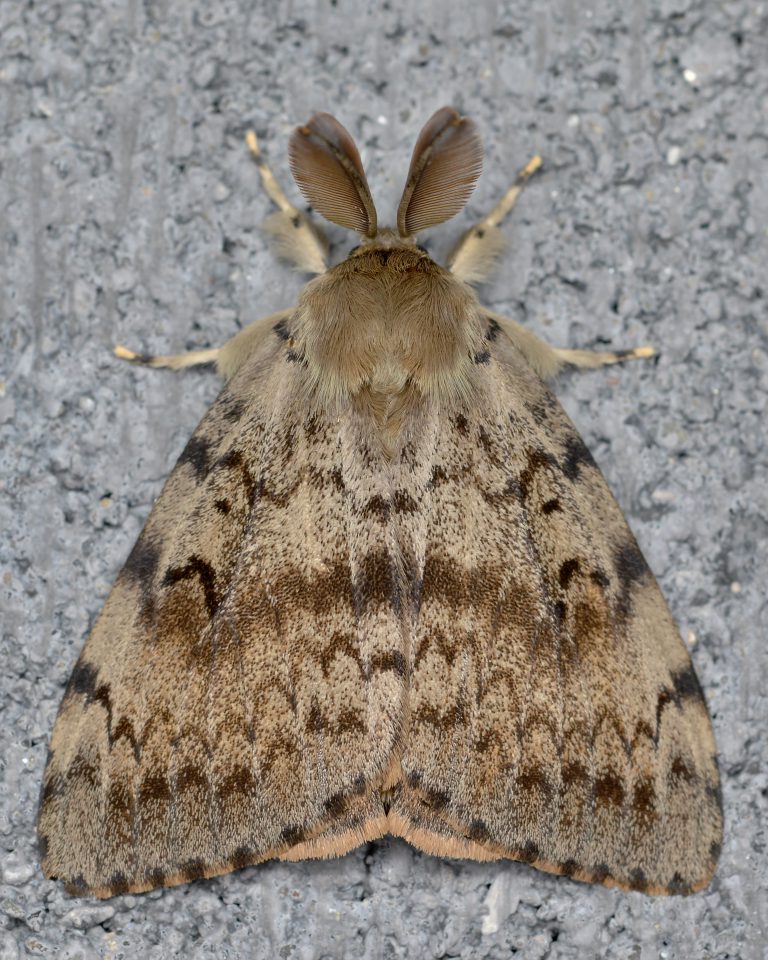 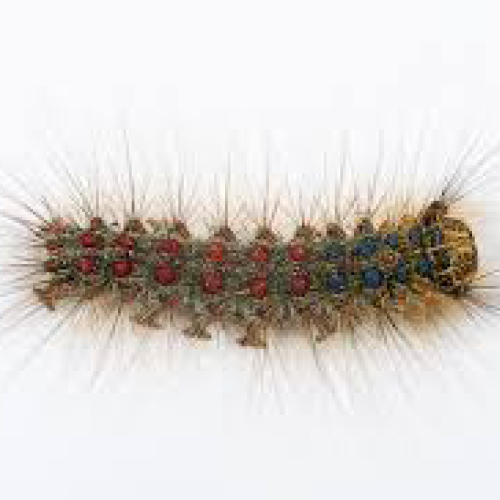 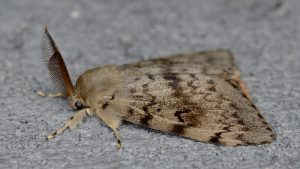 In July 2021, the Entomological Society of America removed “gypsy moth” as a recognized common name in its Common Names of Insects and Related Organisms List. At the same time the Entomological Society of America launched a new program to review and replace insect common names that may be inappropriate or offensive because they perpetuate negative ethnic or racial stereotypes.

The Invasive Species Centre will be transitioning our materials from “gypsy moth” to Lymantria dispar (Ldd) and the future common name.  We will be sharing information about this change at events and in our resources.

The Ldd moth is native to Europe and is currently established in northeastern United States and eastern Canada (portions of Ontario, Quebec, New Brunswick, Prince Edward Island and Nova Scotia). The larvae (caterpillars) feed on crown foliage of a wide range of hardwood and some softwood trees, which makes it a defoliating forest pest of concern.

Eggs: Tanned yellow, covered with fuzz and found as “egg masses” in the protected areas of trees and outdoor items such as, vehicles, garbage cans, furniture and children’s toys. 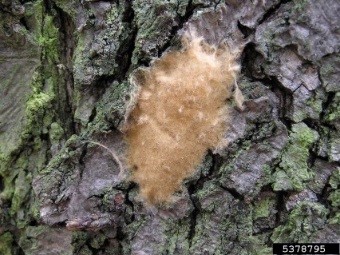 Larvae: Up to 6 cm in length, covered with hairs. The caterpillar is characterized by five pairs of blue dots and six pairs of red dots that run down its back.

Pupal stage: Larval caterpillars transition to become winged moths. During this stage the skin of the larva hardens and metamorphosis takes place inside the dark brown shell.

Adults: Winged moths. Males are brown in colour and have feathery antennae. Females are beige in colour and cannot fly. The adults cannot feed due to the lack of a mouthpart, leaving them only about two weeks to mate and produce eggs before they die.

The Ldd moth female lays between 500 to 1,000 eggs in tree bark crevices. The eggs are covered with hairs from the female’s abdomen. The eggs hatch in spring (April), and the emerging larvae from the eggs climb up the trees to feed on leaves. The majority of the feeding occurs during the night. The larval stage lasts for approximately 40 days. At the end of this stage, the larvae seek safe shelter to pupate. In early summer (June-July), the larvae enter a transitional stage for 10 to 14 days in which the larvae transform into adults. Adults have less than two weeks to mate and reproduce before they die.

The Ldd moth has over 300 known host plant species, and about 150 of them are considered favoured hosts. The favourability of a forest species influences the severity and longevity of an infestation. A caterpillar feeds primarily on hardwood trees, and may feed on softwood trees.

Some favoured host tree species include:

Signs and symptoms of Ldd moth include:

The Ldd moth is native to Europe, Asia, and north Africa. Introduced to North America 130 years ago, and has since been detected in states in northeastern U.S.A. and in portions of the eastern Canadian provinces of Ontario, Quebec, New Brunswick, Prince Edward Island, and Nova Scotia.

The long-distance spread has been largely attributed to the movement of firewood, as well as outdoor recreational and household articles; public awareness could significantly reduce and limit the spread to new areas.

To see the current EDDMapS distribution map, click on the link below.

In Canada, the Ldd moth is federally regulated by the Canadian Food Inspection Agency. The CFIA outlines the following directives:

D-08-04: Plant Protection Import Requirements for Plants and Plant Parts for Planting: Preventing the Entry and Spread of Regulated Plant Pests Associated with the Plants for Planting Pathway

D-02-12: Import requirements for non-processed wood and other non-propagative wood products, except solid wood packaging material, from all areas other than the continental United States

D-01-12: Phytosanitary Requirements for the Importation and Domestic Movement of Firewood

D-98-09: Comprehensive policy to control the spread of North American gypsy moth, Lymantria dispar in Canada and the United States

D-98-08: Entry Requirements for Wood Packaging Materials Produced in All Areas Other Than the Continental United States

Ldd moths are most destructive in their larval stage – as caterpillars – stripping away foliage from a broad variety of trees. Repeated defoliation stresses trees and can lead to mortality, especially in urban or drought-stricken areas, and can weaken tree regeneration due to impacted seed production and root sprouting.

An estimated 595 million hectares of North America are considered climatically suitable for the establishment of Ldd moth populations (Gray, 2004). The efforts to control and manage the pathways of Ldd moths is crucial to mitigate the possible economic, ecological, and social impacts on potential areas of spread.

An infestation can defoliate a broad range of tree species, impacting the aesthetics of a forest. In urban areas, this can impact property values and impose costs for tree removal and replacement. In addition, tree defoliation can negatively affect tourism.

Invasions are capable of affecting forest tree composition. It is a concern that Ldd moth might affect the oak regeneration success in eastern North America, given that oak species are one of the preferred.

Direct skin contact with Ldd moth caterpillar hairs could result in a rash and/or skin irritation. On a recreational level, defoliated trees and thinned canopies degrade the aesthetic value of trees.

Ldd moth management strategies are either intended for immediate control of populations during outbreaks where it is established to minimize the impact, or long-term strategy methods intended to prevent the introduction and spread.

In areas where Ldd moth is established, integrative pest management techniques such as burlap banding and pheromone traps are used to keep populations suppressed and at a manageable level. Detection traps using pheromone lures are often used as a means to define the extent of the spread over an area or where it may still exist after a treatment has taken place. Pheromone traps are also used in combination with other management methods for suppression and eradication of Ldd moth populations. In addition, education is important because the cooperation of the public can play an important role in slowing or preventing the spread of Ldd to new areas. Finally, pathway regulation and phytosanitary risk mitigation measures such as establishing quarantines can help slow the spread.

Detection surveys such as pheromone-based trapping can provide information about the status of Ldd moths in Canada and the U.S. These surveys determine whether the species is present, absent, in restricted distribution, widespread, or eradicated in a given area. This data is available on the CFIA website.

Small scale Ldd moth populations can be managed mechanically through:

In Canada, Btk (Bacillus thuringiensis) bacterium spray treatment has been used to control the Ldd moth where established on public trees prior to egg hatch, as it is only poisonous to the larvae.

Entomophaga maimaigi is a target species specific fungus that infects populations in their native range in Japan. It had been introduced in the United States and had caused mass mortality for populations where established. Infections are more likely to spread in a wet spring, than in any other season.

Nucleopolyhedrosis virus (NPV) is a virus that only affects Ldd moth. NPV occurs naturally but only in large populations. The virus severely damages the internal organs of caterpillars, thereby killing them. This was used in Canada to develop the biological pesticide, Dispavirus. 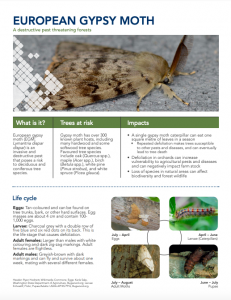 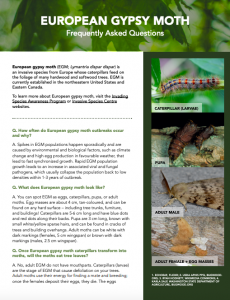 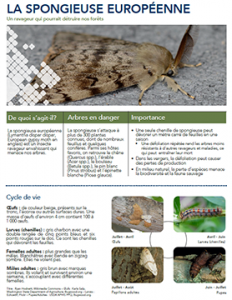 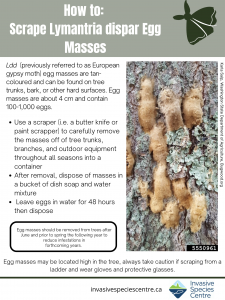 How to Scape Egg Masses

Forest Under Attack: The History, Dispersal and Management of Ldd Moth

Climate suitability and management of the gypsy moth invasion into Canada

J Régnière, V Nealis, K Porter – … Impacts of Non-Native Invertebrates and …, 2008 – Springer
The gypsy moth has become established throughout southern Canada east of Lake
Superior where the climate is suitable for the completion of its univoltine life cycle. The
spread of the gypsy moth to the north and west in Canada has so far been prevented by …

U Alalouni, M Schädler, R Brandl – Journal of Applied …, 2013 – Wiley Online Library
The population densities of the gypsy moth (L ymantria dispar; Lepidoptera: Lymantriidae)
may reach outbreak levels that pose considerable economic and environmental impacts to
forests in E urope, A sia, A frica and N orth America. Compared with the situation in its native …

Gypsy moth invasion in North America: a simulation study of the spatial pattern and the rate of spread

M Jankovic, S Petrovskii – Ecological complexity, 2013 – Elsevier
Gypsy moth is regarded as one of the top most harmful invasive species. Its invasion in the
northeastern US has led to widespread forest defoliation, wildlife disruption and even a
change in biogeochemical conditions over the area of 10 6 km 2. Spread of gypsy moth has … 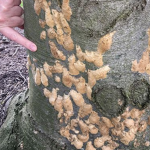