Wildfires are a destructive force but are really a very natural part of forest succession and actually have several ecological benefits. Some species, like the Lodgepole pine in Canada’s west, have actually evolved over their hundreds of years interacting with the lands, to utilize fire. The lodgepole and jack pines, both found in Canada’s boreal, have serotinous cones – cones that require the heat of fire to release their seeds! These species act as pioneer species, being the driving force for forest regeneration after a fire. In Canada, forest fires are carefully managed to protect humans, while allowing fire to play its role within the forest.

So, if wildfires are natural for maintenance of healthy forests, what makes them burn out of control? There are many considerations, including forest management practices, but invasive species and climate change can also play great and overlapping roles. One of the main beneficial roles of wildland fires in forests is to clear the forest floor from build up of dead plants, choking out new growth and inhibiting access to the soils. Invasive vegetation in the understory can exacerbate fires by creating abnormal increases in that buildup on the forest floor. These species tend to burn hotter and cause more frequent fires. When invasive plants invade less fire-prone ecosystems, the native species inhabiting those areas have not co-evolved with fire like our jack pines, but rather species like cedar are quite susceptible to fires and can take years to regenerate again after fire disturbance.

Invasive insects also play their own role in fires and can actually cause great disturbance in even our fire-evolved forests. In Canada’s west, forest fires have been shaping the landscape for centuries. In more recent history, insect pests like mountain pine beetle and climate change, among other factors, have created a disturbance in the natural fire regime. Over the past couple of decades, bark beetles, specifically mountain pine beetle, have been causing extensive tree mortality across the western forests. Bark beetle activity in these dense, often overmature forests create a change in fuel availability for fires, altering the crown and canopy, the litter on the forest floor, and the amount of woody debris. As a bark beetle infestation progresses and death and debris increase at faster rates, forests become more susceptible to fire and become a more dangerous place for firefighters to work in the case a fire does occur. The dry, dead, standing trees and needles create crown fires that spread quickly and are difficult to control. 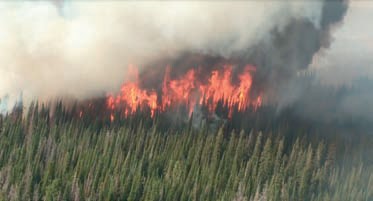 Prescribed burns have been used for centuries and are a commonly used tool by forest managers to safely obtain all of the great benefits fire has in our natural forests. However, the impacts of climate change on forests and communities, including extreme weather and prolonged drought conditions create an even more hostile environment in these forests. Thankfully, research is ongoing and our knowledge on sustainable forest management, fire dynamics, invasive pest and plant dynamics, climate change and all of their interactions is constantly evolving, giving us the opportunity to manage our forests in a way that will keep them healthy for centuries to come.