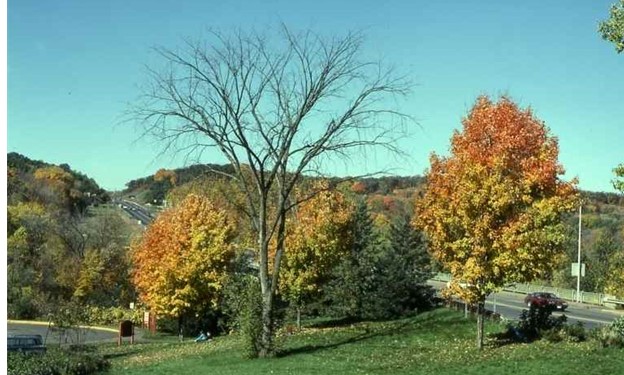 Did you know? Dutch elm disease is a fungal pathogen that is transported between elm trees by both native and invasive elm bark beetle species.

Ophiostoma novo-ulmi, the more aggressive of the two species, is the most common cause of DED infections today. The fungi spread primarily through several species of elm bark beetles which act as vectors, carrying spores from diseased trees to healthy trees.

Dutch elm disease has been present in Canada since the 1940s and has caused immense damage to the elm tree population of Eastern Canada.

DED is caused by pathogenic fungi, O. ulmi and O. novo-ulmi, that lives in the xylem (vascular tissue) of elm trees.

The mycelium of O. ulmi and O. novo-ulmi is creamy white and is composed of septate hyphae (a branching, filamentous structure with separated cells) containing haploid nuclei.

Dutch elm disease is caused by a fungal pathogen that lives in the vascular tissue of elm trees (Ulmus spp).

All elm species are susceptible to DED, but the most substantial impacts have been on American elm and Rock elm.

The fungi which cause DED can spread from tree to tree through two modes of transmission, insect vectors and root grafts.

Egg-laying female beetles are attracted to weakened trees, such as those infected by DED, where they dig maternal or egg galleries beneath the bark to deposit their eggs. These galleries reach the vascular tissue of the tree, on which the larvae will feed and take about 3 weeks for the female to build. After about one week, the eggs hatch and the larvae begin to dig larval galleries which run perpendicular to the egg galleries.

The larvae feed on the tree’s vascular tissue for about 30 days before boring a pupal chamber where they undergo metamorphosis into pupae and then about two weeks later into adults. Adults emerge through holes bored out of pupal chambers (Santini and Faccoli, 2015).

Broods that develop in trees infected by DED will be exposed to the fungus present in the vascular tissue and become carriers. As adults, they emerge covered in fungal spores and fly away to feed on healthy elm trees, creating feeding wounds in the twig crotches which introduce the fungal spores directly to the tree’s vascular tissue.

DED can also be transmitted through root grafts (a natural fusion between roots of compatible plants growing near one another) between infected trees and healthy trees, particularly when the two trees are derived from the same parent plant. Root grafts form naturally between closely spaced elm trees with intertwined roots, and healthy trees growing within 7 meters of infected trees are nearly 100% guaranteed to become infected (D’Arcy, 2000).

Once inside the tree, the fungus spreads within stems and roots of living elms both by passive transport of spores and by mycelial growth of colonies initiated by the spores that germinate in the vascular tissue. Spores are produced both sexually and asexually.

These conidia can stick to beetle vectors that tunnel into the wood. In healthy trees, small, white, oval conidia are formed in clusters on short mycelial branches. These conidia are transported through the vascular tissue, spreading the disease throughout the tree (D’Arcy, 2000).

Both DED-causing Ophiostoma species have two mating types (A and B). When the two mating types come together, they form ascospores inside structures called perithecia. These ascospores accumulate into sticky droplets which are discharged from an opening in the perithecia and can stick to and be disseminated by beetle vectors (D’Arcy, 2000).

DED-causing fungi, O. ulmi and O. novo-ulmi, live in the vascular tissue of elm trees in the leaves, branches, roots, and trunk. All Elm trees native to Canada are susceptible.

The first sign that an elm has been infected by DED is wilting and yellowing or browning of leaves in the tree’s upper branches which occurs out of season, usually in mid-summer. The fungus growing in the tree’s vascular tissue cuts off the sap supply and poisons the tree with fungal toxins, drying out leaves that wilt and die. This gradually spreads down to the rest of the tree, resulting in eventual death.

Dead and dried-out leaves usually remain attached to the tree (this is referred to as flagging), however, trees infected later in the summer will usually undergo premature leaf drop. This can sometimes be confused with natural fall leaf drop. In the year following infection, leaves will fail to develop or develop undersized and wither soon after.

The damage caused by DED can also be seen within the tree and infection is often more widespread internally than shown by external symptoms. Healthy elm wood is cream-coloured, but infected branches display ring-shaped, brownish discolorations in the vascular tissue and exposed wood beneath the bark will have numerous brown streaks.

Signs of bark beetle infestation, DED’s primary source of transmission, can also be seen on infected trees. Beetle emergence holes can be found on the bark and are about the size and diameter of a pencil lead. Sawdust on the bark may indicate a burrowing beetle.

Bark beetles themselves are dark brown to black, approximately 3 mm long with a rough shell sprouting short, stiff, yellow hairs. European elm bark beetles are smaller and more aggressive, the latter trait allowing them to be more successful colonizers than their native counterparts.

Two other elm diseases, Verticillium wilt and Dothiorella wilt, may display similar symptoms to DED but are not as serious. Sampling and testing can be done to determine if DED or one of these look-alikes is present.

DED emerged in the Netherlands shortly after the first world war. Quickly spreading from Europe, it was established in Great Britain by 1927, in the United States by 1930, and reached Eastern Canada by 1945, transported through infected lumber. The first confirmed case in Ontario was in 1946. During the 1970s and 80s, the majority of elm trees in Eastern Canada succumbed to the disease. By the 1980s, DED had spread west to Manitoba and Saskatchewan, but as of 2021, it has not yet invaded Alberta and British Columbia, where elm trees are present but have been planted beyond their natural range (Hubbes, 1999).

As all elm species native to Canada are susceptible to DED, the disease wiped out most of the population in Eastern Canada. However, some young and medium-aged elm trees can still be found in the wild. The most devasting effects can be seen on American elm populations, of which 95% were wiped out (GRIPP 2018).

DED has had a significant impact on urban elm trees.  In Montreal, nearly 90%  of the city’s elm trees succumbed to DED between 1970-80, and the city of Toronto had lost 80% of its elm population by 1976. Elms play an important role as shade trees in many urban areas. Lethbridge, Alberta estimates that they provide nearly 30% of the city’s shade. Today, the total value of the 700,000 elms that serve as shade trees in Canadian cities is estimated to be over $2.5 billion dollars (Hubbes, 1999).

Provincial regulations are also in place by the provinces of Alberta, Nova Scotia, Manitoba, and Saskatchewan.

Swift detection and removal of diseased trees is a vital first step in DED management. It’s important to monitor trees for symptoms throughout the summer months and prune and remove any dead branches. Trees with many infected branches will need to be taken down and removed, and any roots within 15 m of healthy elms should also be destroyed to prevent spread through root grafts.

A fungicide injection is available for some high-value elm trees which provides protection from the disease. However, in most cases, this treatment is ineffective and impractical, and it is not useful for trees already infected.

D-factors (cytoplasmically transmitted ‘virus-like’ agents) can decrease the damage done by DED by slowing its growth and reducing its infective potential (Sutherland and Brasier, 2003). Though promising, a number of issues still need to be resolved and the product is not yet registered in Canada (Grondin and DesRochers, 2015).

Another potential biocontrol agent is the bacteria Pseudomonas syringae, which has the benefit of having no known pathogenic effects on elm trees. Testing on elm trees native to Europe demonstrated that trees inoculated with this bacteria had increased resistance to Dutch elm disease. A product based on this isolate is registered for use in Canada, the Netherlands and the United States (Grondin and DesRochers, 2015).

Efforts are ongoing to create Dutch elm disease-resistant cultivars of native elm tree species. In Canada, this research is led by the University of Guelph, where resistant white elm trees, grown and screened in their arboretum, are now being distributed to satellite orchards around the province.

The movement of firewood is a major pathway of spread, not just for Dutch elm disease but for a wide range of invasive forest pests including the emerald ash borer, the Asian longhorn beetle and the Spongy moth. This is why it is vital to limit the movement of untreated firewood, for example to or from a campground or cottage. Consider buying your firewood locally instead. For more information, see the Canadian Food Inspection Agency’s guidelines on when you can and cannot move firewood.

Early detection is key to controlling the spread of DED. If you see signs of DED in elm trees in your area, report it.