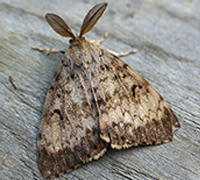 Lymantria dispar dispar (Spongy moth) has made headlines this year in the forest community as well as in popular media. 2021 is the third straight year of population growth that we have seen across the forest of Southern Ontario, with further populations breaking out as far north as Sault Ste Marie.

The Ministry of Northern Development, Mines, Natural Resources, and Forestry’s (MNDMNRF) Forest Health Team has been working hard to monitor the defoliation and look for signs that there may be collapse in the population (Ontario). Unfortunately, there seems to be no drastic change in sight for the 2022 season.

Spongy moth is an invasive that is very well known in the forestry community. It has been in North America since the 1860s and started slowly expanding throughout the USA and entering Canada 100 years later.

The female spongy moths cannot fly, and therefore crawl a short distance to lay their eggs for the next life cycle. The females will lay their eggs anywhere that is slightly sheltered from the elements, usually found on the underside of branches, in bark cracks, along the ground, as well as on human structures like sheds, trailers, and vehicles. In the springtime, small young caterpillars use the long hairs on their body to catch the wind blowing them further across the landscape moving from hilltop to hilltop.

This is how spongy moth has spent the last 5 decades moving throughout Ontario with population outbreaks mostly in the 80s and early 90s of 100,000 hectares or more. This species has remained relatively under control with the aid of natural biocontrol agents like Nuclear polyhedrosis virus (NPV) and Entomophage maimaiga fungus. However, spongy moth has had a few years of optimal environmental conditions to explode in population.

In 2020, Ontario had the highest defoliation area recorded in the province ever for spongy moth, with 580,000 hectares of defoliated area (area of trees with little to no leaves). However, in 2021, the spongy moth caterpillars defoliated a record breaking 1.77 million hectares of Ontario forests.

The most pressing question now is can we predict what 2022 spongy moth infestation will be?

Answer: No and Yes.

No, because no one can predict the future!

Yes, using a technique called the Modified Kaladar Plot (MKP), the MNDMNRF counts the egg masses found in forest plots across the province to calculate how much defoliation will occur. These surveys are conducted by municipalities to make estimations of defoliation.

Quinte West was able to share their results conducted by BioForest, which estimate  that 78% of their plots will show severe levels of defoliation in 2022. We are currently waiting for the MNDMNRF to complete their provincial wide surveys, however their results will most likely be similar.

With this information, homeowners or landowners can plan to try and combat this invasive species. Making a scaled management plan for your land is important. If you are a homeowner with 1-10 trees on your property, egg mass scraping and burlap tree wrapping are the best methods for management (under $100).

Another method is to consider getting your trees inoculated with TreeAzin, which is a stem injected pesticide that kills the caterpillars eating the leaves (estimated cost $100-300/tree). For landowners with 1+ hectare of land, consulting with a registered professional forester is a great way to help make the best decision for long-term success of your property.

Prevention of defoliation by spongy moth on large areas of forest is challenging but aerial spray programs using the biological pesticide BTK (Foray 48B) is an option.

Aerial spray programs are highly effective management tools to help prevent defoliation (~$250/hectare). Most often conducted by helicopter or fixed wing aircraft, aerial spray programs are conducted between mid-May and early June depending on caterpillar emergent degree day models/forecasts. This four-week window is the only time BTK is effective since it must be ingested by the caterpillars while eating the leaves.

BTK is a bacterium that is sprayed onto the leaf surface. Caterpillars will eat the leaves ingesting the bacteria causing ruptures in their stomachs that lead to death.

Nominating a point person to speak with the aerial spray applicator is the best form of communication or hiring an RPF who can manage the operation for the group. All applications for aerial spray programs must be submitted to Ontario Centre for Forest Defoliator Control before March 1, 2022.

In the history of spongy moth, sharp increases in population are followed by equally sharp decreases. However, the 2021 outbreak of spongy moth has shattered expectations and could possibly highlight a new norm when dealing with invasive species and climate change.

The 2022 infestation of spongy moth is looking to be another bad year if the Quinte West and Provincial MKPs are similar. For now, the NPV and fungus are present in the population, and since spongy moth don’t wear masks and have not been social distancing, these control methods may spread to cause a population crash.