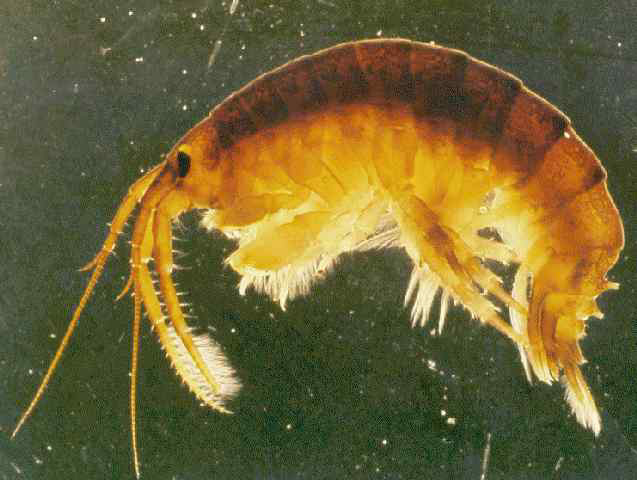 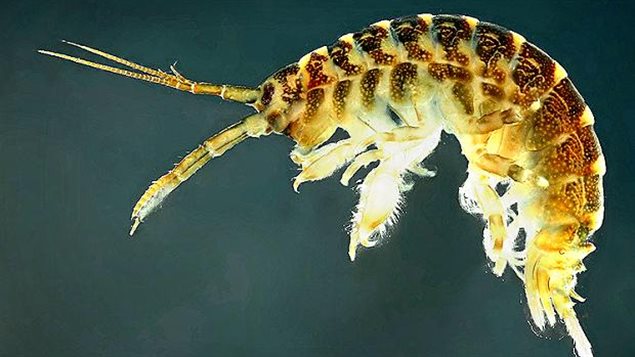 Killer shrimp can either be solid in colour or have a striped pattern.
Photo Credit: Michal Grabowski/Enviroment Agency 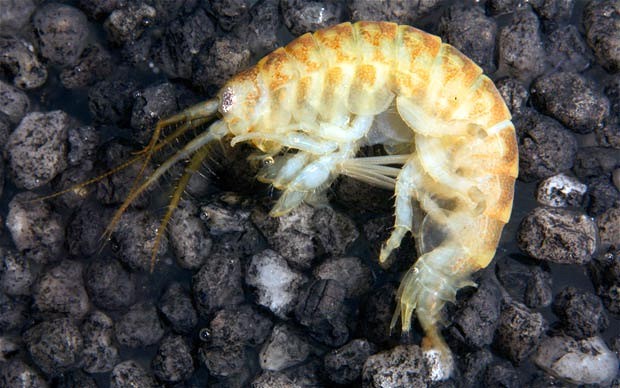 Killer shrimp can survive up to four days out of water.
Photo Credit: Michal Grabowski/Enviroment Agency

Killer shrimp are an aggressive predatory freshwater invasive invertebrate. They grow up to 3 cm long, have two tail cones, and two large, powerful mandibles. Killer shrimp can either be solid in colour or have a striped pattern. Killer shrimp are named because of their aggressive feeding habits; they consume large amounts of aquatic insect larva and food that native fish rely on. They also kill large amounts of organisms but don’t actually consume them. This behaviour disrupts food webs and decreases biodiversity. Killer shrimp can survive up to four days out of water, making it very easy to accidentally transfer them from waterbody to waterbody. It is very important that all fishing equipment is properly cleaned between uses and that your boat is washed off before switching waterbodies.

General Information
Fact Sheets
Articles
Further Reading
Description
Killer shrimp has a typical laterally compressed, arched, and semi-transparent body. The maximum reported body length is 30 mm (Nesemann et al. 1995). The species demonstrates pigmentation polymorphisms, with striped, spotted and uniform morphs. Other prominent morphological features of the species include large and powerful mandibles that make it an effective predator (Mayer et al., 2008). Juvenile individuals resemble adults, but are much smaller in size. Their growth undergoes a number of moultings. Detailed descriptions of D. villosus morphology can be found in Carausu (1943), Eggers and Martens (2001), and Konopacka (2004). 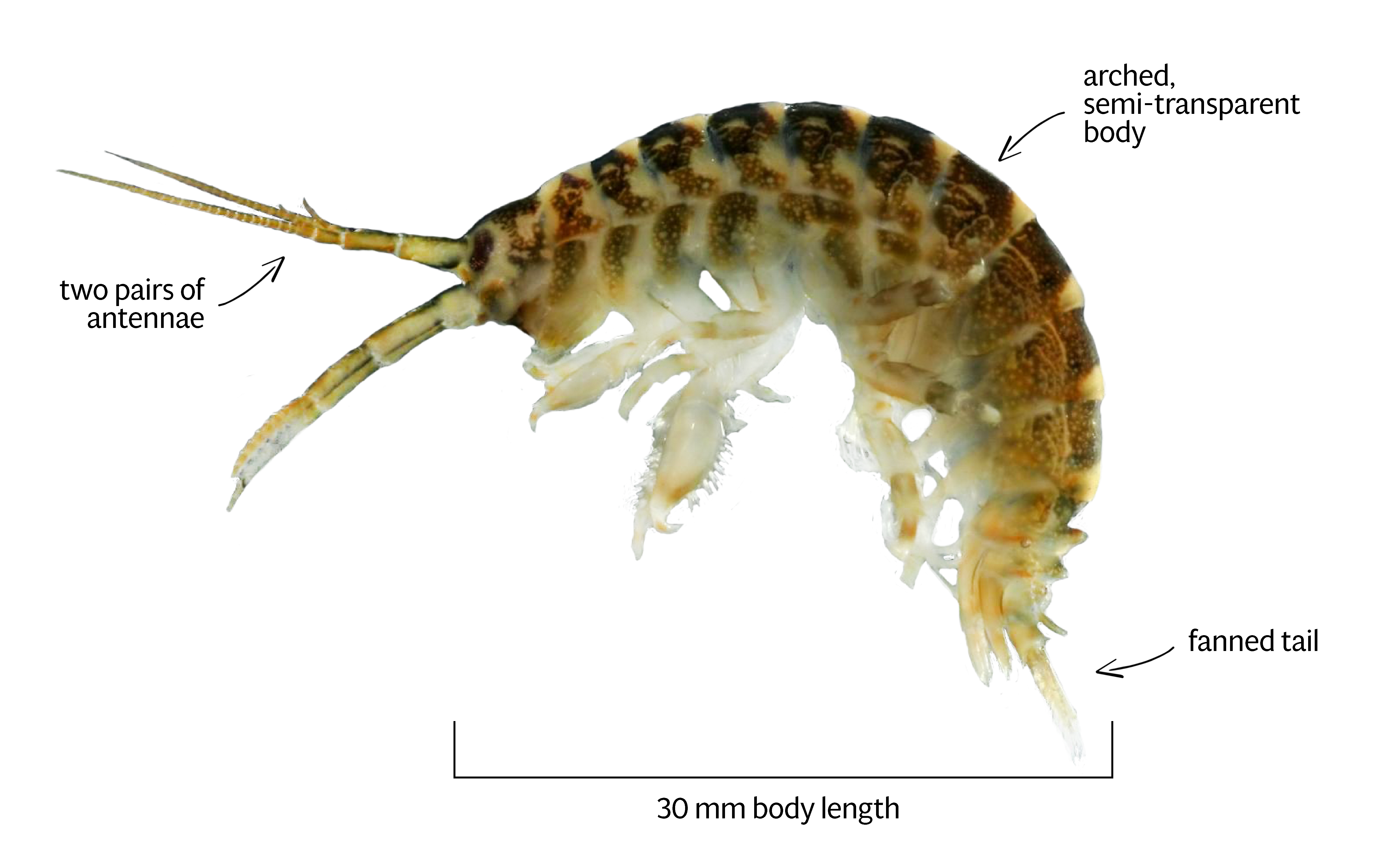 Killer shrimp are a recent invader of Central and Western Europe freshwater ecosystems. Killer shrimp are originally native to the lower reaches of the rivers discharging into the Black and Caspian Seas (Dedju 1967; Nesemann et al. 1995; Vaate et al. 2002). They are widely distributed in the lower reaches of the Danube River system in the region of Eastern Europe/Ukraine (Mordukhai-Boltowskoi 1969; Nesemann et al. 1995). Its original distribution was restricted to the lower Danube by the narrow valley of the Dunakanyar near the confluence of the Danube and Ipoly Rivers (Nesemann et al. 1995).

This species has been nicknamed the “killer shrimp” for its extremely aggressive behaviour towards native invertebrate species. Due to their large body size and well developed mouthparts, killer shrimp are effective predators, which kill or simply bite off much more prey than they can consume (Dick et al., 2002). 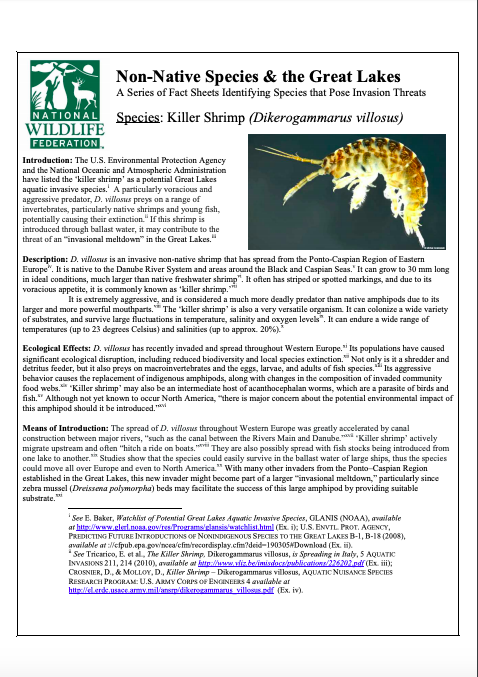 [PDF] The profile of a ‘perfect’invader–the case of killer shrimp, Dikerogammarus villosus

T Rewicz, M Grabowski, C MacNeil… – Aquatic …, 2014 – academia.edu
The ‘killer shrimp‘, Dikerogammarus villosus, has been recognised as one of the 100 worst
alien species in Europe, in terms of negative impacts on the biodiversity and functioning of
invaded ecosystems. During the last twenty years, this Ponto-Caspian amphipod crustacean …

[HTML] Out of the Black Sea: phylogeography of the invasive killer shrimp Dikerogammarus villosus across Europe

T Rewicz, R Wattier, M Grabowski, T Rigaud… – PloS one, 2015 – ncbi.nlm.nih.gov
The amphipod Dikerogammarus villosus has colonized most of the European main inland
water bodies in less than 20 years, having deteriorating effect on the local benthic
communities. Our aim was to reveal the species phylogeography in the native Black Sea

Application of bioclimatic models coupled with network analysis for risk assessment of the killer shrimp, Dikerogammarus villosus, in Great Britain

B Gallardo, MP Errea, DC Aldridge – Biological invasions, 2012 – Springer
In this study we use a combination of techniques to assess the general risk of invasion by
the aquatic invader Dikerogammarus villosus in Great Britain at multiple scales. First,
bioclimatic models (Support Vector Machine algorithm) were used to identify regions … 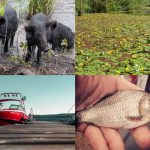