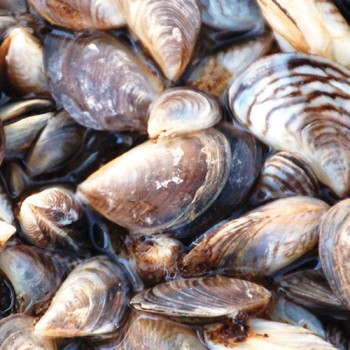 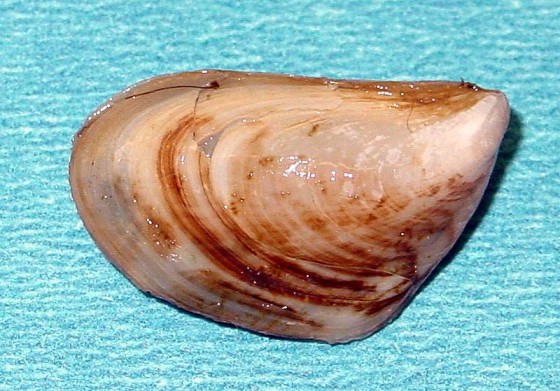 When placed on a flat surface, zebra mussels are stable on their flattened underside while quagga mussels, lacking a flat underside, will fall over.

Zebra and quagga mussels are invasive freshwater mussels that can be found throughout Ontario, Quebec, and Manitoba. Native to the Black Sea region of Eurasia, they arrived in the Great Lakes via ballast water in the larval (veliger) stage and have spread throughout North America. These invasive mussels filter plankton out of the water, which depletes it as a food source for native species. Large colonies can take over fish spawning areas and beaches, cutting the feet of potential swimmers. They also clog water intake lines because of their dense colonies. Zebra and quagga mussels can reduce water quality as they can increase the presence of toxic algal blooms, which can have health impacts on native wildlife. They latch on to boats and can be easily spread between water bodies. Ensure that all plants, animals, and mud are removed from boats and trailers before leaving an area to help prevent the spread of aquatic invaders.

Boating out of province? Know before you go to help protect Canada’s waters.

The zebra mussel is a small freshwater mussel named for the striped pattern of its shell. However, color patterns can vary to the point of having only dark or light-colored shells with no stripes. This mussel is typically found attached to objects, surfaces, or other mussels by byssal threads extending from underneath the shells. When placed on a surface, zebra mussels are stable on their flattened underside.

Although similar in appearance to the zebra mussel, the two species can be distinguished by their shell morphology. When placed on a surface, zebra mussels are stable on their flattened underside while quagga mussels, lacking a flat underside, will fall over. Quagga mussels are more round in shape and have more concentric rings as opposed to the striped pattern of a zebra mussel. 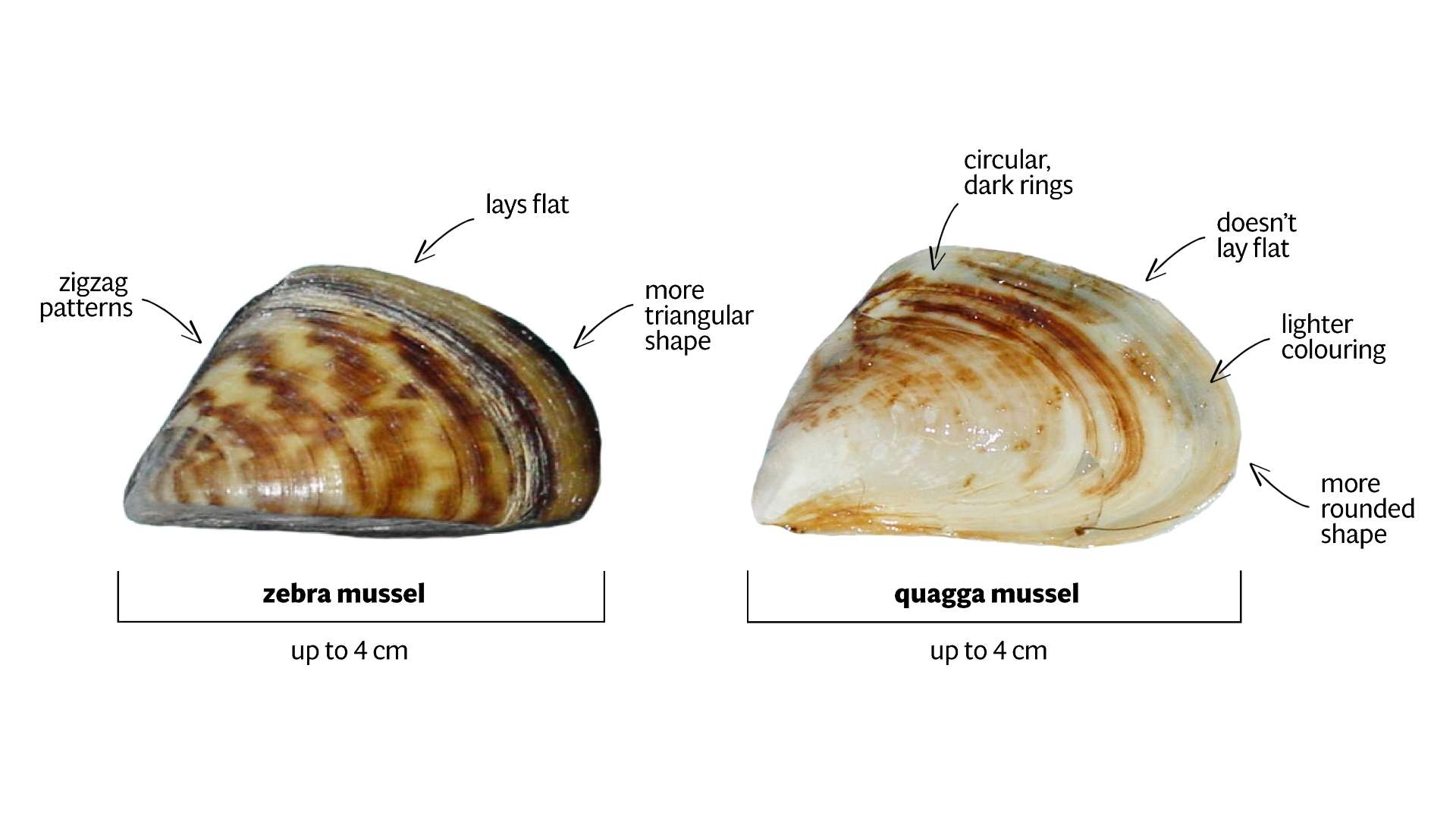 The introduction of zebra and quagga mussels into the Great Lakes is the result of water discharge from transoceanic ships that were carrying veligers (larvae), juvenile, or adult mussels. Although adult mussels move very little, they produce larvae that are free-floating in the water. This mobile larval stage contributes to their rapid dispersal. Adult mussels can attach to boats and barges that navigate the waterways, and in this way, can allow them to be easily transported between water bodies.

Zebra and quagga mussels can have large impacts on the ecosystems they invade. They primarily consume phytoplankton, but other suspended material is filtered from the water as well. This reduces the plankton availability for other organisms, and effects can be seen throughout the food web. This filtering also increases the amount of sunlight able to penetrate the water, promoting algal blooms and leading to decreased water quality. Invasive mussels also attach to the shells of native species, suffocating populations of already threatened populations of freshwater mussels.

Invasive mussels also retain toxins as they filter the water, which can lead to botulism in mussel-eating fish and waterfowl.

New research suggests invasive mussels are playing a role in the phosphorus cycle in lakes Huron, Erie, Michigan and Ontario which causes uncertainty and variability in these levels. This could have impacts on the phytoplankton communities to large predatory fish.

Impacts of quagga mussels on infrastructure

This species ability to rapidly colonize hard surfaces causes serious economic problems. These major biofouling organisms can clog water intake structures, such as pipes and screens, therefore reducing pumping capabilities for power and water treatment plants and posing costs to industries, companies, and communities. Recreation-based industries and activities have also been impacted; docks, breakwalls, buoys, boats, and beaches have all been heavily colonized. Quaggas are able to colonize both hard and soft substrata, so their negative impacts on native freshwater mussels, invertebrates, industries and recreation are unclear.

Impacts of zebra mussels on infrastructure

Zebra mussels are notorious for their biofouling capabilities by colonizing water supply pipes of hydroelectric and nuclear power plants, public water supply plants, and industrial facilities. They colonize pipes, constricting flow, and therefore reducing the intake in heat exchangers, condensers, fire fighting equipment, and air conditioning and cooling systems. Zebra mussel densities were as high as 700,000/m2 at one power plant in Michigan and the diameters of pipes have been reduced by two-thirds at water treatment facilities. Navigational and recreational boating can be affected by increased drag due to attached mussels. Small mussels can get into engine cooling systems causing overheating and damage. Navigational buoys have been sunk under the weight of attached zebra mussels. Fishing gear can be fouled if left in the water for long periods. 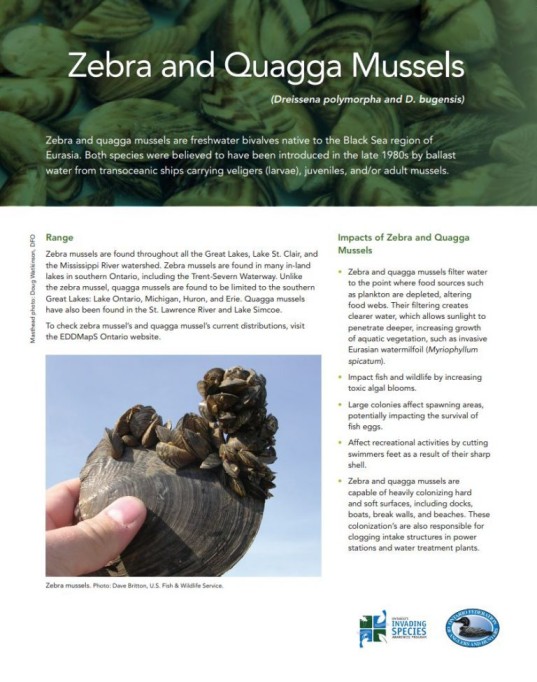 Zebra versus quagga mussels: a review of their spread, population dynamics, and ecosystem impacts

TF Nalepa, DW Schloesser – 2013 – content.taylorfrancis.com
When our first edited book on zebra mussels (Dreissena polymorpha) was published
(Nalepa and Schloesser 1993), it was only a few years after this species had been reported
in North America, and our intention was to document initial impacts, summarize control …